Lehigh is a city in Webster County, Iowa, United States. The population was 395 at the time of the 2020 census.

Located in a valley, Lehigh is divided in two by the Des Moines River, unusual for such a small town. Originally the two halves of Lehigh were two separate towns. While the town on the west side of the River was always called Lehigh, the east town was called Slabtown, and a piece of history marks the east side's roots––a sign that hangs over the playground with the words "Slabtown Traders," perhaps alluding to the flea market which is held there every summer during Lehigh River Days. The "Slabtown Traders" sign was blown over by a gust of wind in the summer of 2010. It survived several floods while being located on River Street. Lehigh was surrounded by coal mines until the early 20th century and home to a large clay sewer pipe factory until the 1980s. Dolliver State Park, Brushy Creek State Recreation Area and Woodman Hollow State Preserve are located within a few miles of the town.

Lehigh's first settlers, a Mr. Reed and Mr. Wright, set up a steam sawmill on the site in 1855. Originally, the town was named Slabtown because slabs, scrap from the mill, were used in construction. By 1870, there was a Methodist church and a school, and Oliver Tyson had purchased the mill and expanded it, adding a flour mill. Soon after this, Tyson opened a store. The town was later renamed Lehigh, comparing the local coal veins to those of Pennsylvania's Lehigh Valley. 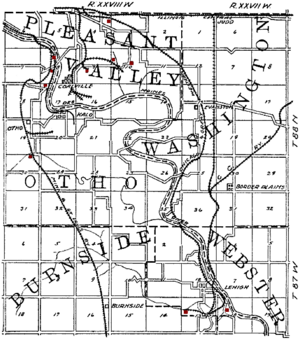 Map of the Lehigh area from 1908, showing the railroads and coal mines (in red) of the region. Lehigh is in the bottom right quadrant.

In 1871, W. C. Wilson of Webster City opened a coal mine in Lehigh and formed the Crooked Creek Railroad and Coal Company. The company built a 3-foot gauge rail line from Judd, on the Illinois Central Railroad 8.5 miles south to the mines, including a 370-foot wooden truss bridge across the Des Moines River. The line was later extended to Webster City. By 1894, the company had opened 5 mines, all using longwall mining. The Webster Coal and Land Company operated a mine near Lehigh from 1899 to 1902.

The Crooked Creek railroad was widened to standard gauge in 1880 and a line to Webster City was built in 1886. In 1916, the line was incorporated into the Fort Dodge, Des Moines and Southern Railroad, Iowa's longest Interurban line. Diesel traction replaced overhead electric lines in the 1950s and the track was abandoned in 1962.

By 1901, Lehigh was large enough to support a new First National Bank, with an initial capitalization of $25,000. The bank must have been small; in 1910, O. J. Woodward arrived in town to become the cashier, manager and director of the bank. 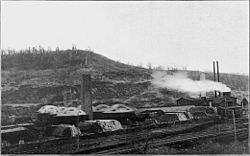 The Lehigh Brick and Tile brickyard, circa 1903.

In addition to coal mines, Lehigh was home to several other industries. The most prominent were brickyards that used the shale of the coal measures as a source of clay to make both brick and drain tile, firing their kilns with local coal. One of these, the Lehigh Brick and Tile company, won the contract to provide paving brick for Dubuque, Iowa in 1896, but suffered a serious fire in late 1897.

In 1901, there were 2 large brickworks in Lehigh, the Corey Pressed Brick Company and the Lehigh Clay Works, which began operation in 1900. In addition, the old Lehigh Brick and Tile works was being rebuilt after the fire. Corey was mining clay from both above and below the coal seam. By 1903, Lehigh Brick and Tile was back in production, the Lehigh and the Campbell brickyard of the Webster city Brick and Tile Company. The Cory plant was primarily a brickworks, while the others primarily produced drainage tile.

There were 205 households, of which 18.0% had children under the age of 18 living with them, 43.4% were married couples living together, 7.3% had a female householder with no husband present, 6.8% had a male householder with no wife present, and 42.4% were non-families. 36.6% of all households were made up of individuals, and 19.1% had someone living alone who was 65 years of age or older. The average household size was 2.03 and the average family size was 2.61.

All content from Kiddle encyclopedia articles (including the article images and facts) can be freely used under Attribution-ShareAlike license, unless stated otherwise. Cite this article:
Lehigh, Iowa Facts for Kids. Kiddle Encyclopedia.