Callender is a city in Webster County, Iowa, United States. The population was 368 at the time of the 2020 census.

Between 1866 and 1870 the Des Moines Valley Railroad Company constructed tracks between Des Moines and Fort Dodge. The other end of the line originated at Keokuk, Iowa (at the confluence of the Des Moines and Mississippi rivers). As a result, several small towns were created by the railroad along the line to support track maintenance and to grow business. At 7 to 10 mi (11 to 16 km) intervals were 38 stops between Keokuk and Fort Dodge. Kesho, town that would become Callender, was the 36th stop.

According to the County Assessor’s records, the town of Kesho began south of the road (Thomas Street) on the east side of the railroad tracks. There, Gurmond and Thora Bean had established a store in 1867–68. The store was operational when the Des Moines Valley Railroad made it to Kesho in December 1869; however, a November 24, 1870 newspaper article from the Iowa Northwest Newspaper reads, “The city has disappeared from the face of the earth—not like Pompeii—but it has gone off on wheels. First the horse barn fell down, then the hotel was taken to pieces and moved off, and lately the depot has been hoisted on wheels, moved 9 miles (14 km) up the road and landed near the Sioux City Junction (Tara). Kesho is now inhabited by muskrats alone.” A new depot replaced the old one that existed until it was demolished in 1972. Post office records indicate that there was a post office in Kesho from 1873 until 1877.

In 1875 the town was renamed Callender in honor of Agnes and James Callender of Brooklyn Heights, New York City, New York who owned all of the land on the west side of the railroad tracks and much of the surrounding area—Webster’s Prairies. The Callenders donated land to the town for churches, the school, City Hall and the City Park. A second depot was built on the west side of the track, north of Main (Thomas) Street. The existing town retains much of the 1875 town form, including the donated properties.

According to the United States Census Bureau, the city has a total area of 0.52 square miles (1.35 km2), all of it land. 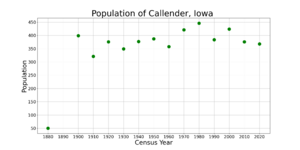 The population of Callender, Iowa from US census data

Callender is at the intersection of County Roads P33 (Fairbanks Ave) and D43 (295th St).

The Union Pacific Railroad is on the east end of town

The Fort Dodge Regional Airport is located 20 miles northwest of town. It is primarily a general aviation airport, but it does have commercial links from Great Lakes Airlines.

All content from Kiddle encyclopedia articles (including the article images and facts) can be freely used under Attribution-ShareAlike license, unless stated otherwise. Cite this article:
Callender, Iowa Facts for Kids. Kiddle Encyclopedia.