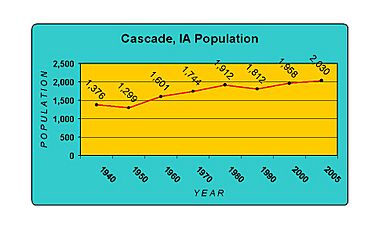 Cascade is a city in Dubuque and Jones counties, Iowa, United States. The Dubuque County portion is part of Dubuque Metropolitan Statistical Area, while the Jones County section is part of Cedar Rapids Metropolitan Statistical Area. The population was 2,386 at the 2020 census, up from 1,958 in 2000. The city is located within southwestern of Dubuque County and north-central Jones County.

Arguably the town's most notable historic event was the 1925 flood. Between 1880 and 1936, the town was connected to Bellevue via the Chicago, St. Paul & Milwaukee Railroad Company. It was Iowa's last narrow gauge railroad with a gauge of 3'. The roadbed curves and grades were considered too extreme for conversion to standard gauge

U.S. Route 151 runs through Cascade but in 2002, a four-lane bypass took traffic north around the city. Iowa Highway 136 runs from north to south through Cascade.

According to the United States Census Bureau, the city has a total area of 1.87 square miles (4.84 km2), all of it land. The North Fork Maquoketa River passes through Cascade.

Cascade is 25 miles southwest of Dubuque. 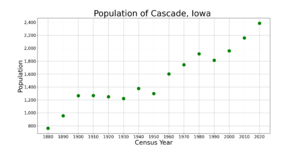 The population of Cascade, Iowa from US census data

There were 880 households, of which 32.3% had children under the age of 18 living with them, 53.4% were married couples living together, 8.5% had a female householder with no husband present, 3.8% had a male householder with no wife present, and 34.3% were non-families. 29.4% of all households were made up of individuals, and 14.5% had someone living alone who was 65 years of age or older. The average household size was 2.39 and the average family size was 2.99. 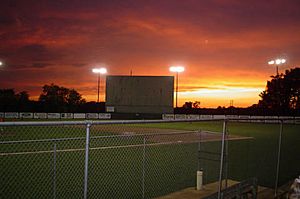 All public school students living in Cascade are zoned to schools in the Western Dubuque Community School District. Students first attend Cascade Elementary School for grades K-5, then the consolidated Cascade Junior-Senior High School for grades 6-12 (both in Cascade).

The Cascade Elementary building, on Highway 151, has a capacity of 420 students, and houses them in 14 general classrooms and two special education classrooms. In 1961, the school was constructed. In 1993 and 2002, it received additional space. In 2017, it had 282 students.

All content from Kiddle encyclopedia articles (including the article images and facts) can be freely used under Attribution-ShareAlike license, unless stated otherwise. Cite this article:
Cascade, Iowa Facts for Kids. Kiddle Encyclopedia.