The city is named for John James Audubon the world-famous ornithologist, artist, and painter.

Audubon was laid out by the Chicago, Rock Island and Pacific Railroad, on September 23, 1878. An auction sale of town lots was held on October 15, 1878 with a total sales of $6,190. The railroad was completed on December 6, 1878 and by December 16, 1878 over fifty houses, a bank, five general stores, one jewelry store, two hotels, one restaurant, three meat markets, three blacksmith shops, one harness shop, one livery stable, two coal yards, two lumber yards, one elevator, three grain dealers, and a school house were built. With the four months of rapid growth in Audubon there was already talk of moving the county seat from Exira which was 13 miles away. In 1879 the railroad built what was to become the county courthouse and leased it to the county for five years free of cost, in case the county seat was moved to Audubon. In the 1879 general election the vote approved the moving of the county seat to Audubon.

Although the railroad was responsible for starting the town, Ethelbert J. Freeman was the driving force behind the growth of Audubon. Having lived in Exira, Freeman was the agent for the sale of the railroad lands and the town lots and was one of the first people to live in Audubon. Already active in county politics, he became the first mayor of Audubon and was prominent in the incorporation of the town in 1880. Freeman was half owner of the Citizens Bank, chief of the fire department, and became the manager of the waterworks built in 1882 and later manager of the electric light plant when it was built in 1891.

The first postmaster was Arthur L. Sanborn, appointed February 15, 1879. The town post office contains a mural, Audobon's Trip Down the Ohio and Mississippi – 1820, painted in 1942 by Virginia Snedeker. Federally commissioned murals were produced from 1934 to 1943 in the United States through the Section of Painting and Sculpture, later called the Section of Fine Arts, of the Treasury Department. Robert Hunter was the first school teacher from 1878 to 1879. The school keep growing in size and enrollment and by the fall of 1887 the school had eight school rooms, a teaching staff of 10, and 416 pupils enrolled. Audubon was a well-established city by 1900, and growth slowed after that. In 1915 the city was recorded to have a public library, 9 lawyers, 10 medical professionals, 3 veterinarians, 7 clergymen, 4 bankers and many other businesses.

According to the United States Census Bureau, the city has a total area of 1.88 square miles (4.87 km2), all of it land. 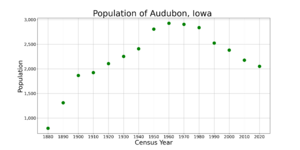 The population of Audubon, Iowa from US census data

Audubon is home to a gigantic bull statue, Albert the Bull. The statue is 30 feet tall, weighs 45 tons, and can be seen from US highway 71 even at night (lighted).

All content from Kiddle encyclopedia articles (including the article images and facts) can be freely used under Attribution-ShareAlike license, unless stated otherwise. Cite this article:
Audubon, Iowa Facts for Kids. Kiddle Encyclopedia.