Estherville is a city in Emmet County, Iowa, United States. The population was 5,904 in the 2020 census, a decline from 6,656 at the 2000 census. It is the county seat of Emmet County. Estherville is home to the main campus of Iowa Lakes Community College.

Estherville was laid out in the late 1850s, and the town was incorporated in 1881. The city was named after Esther A. Ridley, one of the first white female settlers in the area.

Estherville Lincoln Central Community School District will open the 2016-2017 school year with the elementary, middle, and high schools on a single campus. This is the final stage of a plan which has seen the construction of new elementary and middle school buildings as well as renovation of the high school. The district is in the process of implementing 1:1 technology, beginning with Chromebooks for all high school students during the 2015-2016 school year.

The intersection of Iowa Highways 4 and 9 features a statue of the Estherville meteorite breaking up in flight.

Estherville is nearby to Okoboji and Spirit Lake, Iowa. 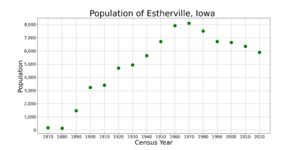 The population of Estherville, Iowa from US census data 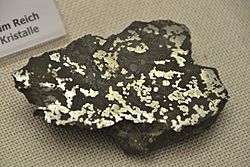 A piece of the stony-iron mesosiderite
found near Estherville 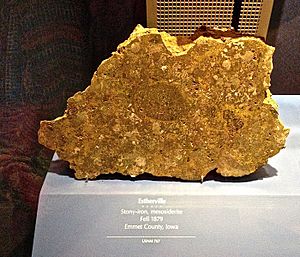 Estherville 1879 meteorite, at the Smithsonian

On May 10, 1879, a 455-pound meteorite fell to earth in Emmet County a few miles north of Estherville, and has become known as the Estherville Meteorite. When it struck it buried itself 15 feet in the ground. It is made of mesosiderite. Portions of the meteorite are on display in the Estherville Public Library, the Smithsonian Museum of Natural History, the Museum Reich der Kristalle in Munich and the Naturhistorisches Museum in Vienna, Austria.

Estherville was home to minor league baseball in 1912. The Estherville team won the Championship in the 1912 Iowa State League, an Independent level league. The team was managed by Harry Welch.

Estherville–Lincoln Central Community School District operates area public schools. It was established on July 1, 1997, by the merger of the Estherville and Lincoln Central school districts.

All content from Kiddle encyclopedia articles (including the article images and facts) can be freely used under Attribution-ShareAlike license, unless stated otherwise. Cite this article:
Estherville, Iowa Facts for Kids. Kiddle Encyclopedia.