Chariton is a city in, and the county seat of, Lucas County, Iowa, United States. The population was 4,193 at the 2020 census. Lucas is the primary distribution center for and the former corporate headquarters of the Hy-Vee supermarket chain.

Designed by local architect William L. Perkins and listed on the National Register of Historic Places for its role in the development of Chariton as a county seat, the Hotel Charitone is listed by the Iowa Historic Preservation Alliance as one of the most endangered sites in Iowa. The hotel is currently undergoing restoration with the majority of the hotel being converted into apartments.

According to the United States Census Bureau, the city has a total area of 3.82 square miles (9.89 km2), all of it land.

Chariton is located at the exact half way point, on

The Lucas County Courthouse is the highest point of elevation in the whole town and is located on the Missouri/Mississippi River Divide. 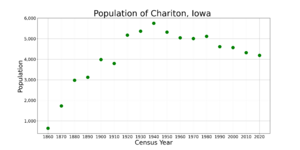 The population of Chariton, Iowa from US census data

There were 1,861 households, of which 28.6% had children under the age of 18 living with them, 46.1% were married couples living together, 9.6% had a female householder with no husband present, 4.0% had a male householder with no wife present, and 40.4% were non-families. 35.9% of all households were made up of individuals, and 19.1% had someone living alone who was 65 years of age or older. The average household size was 2.28 and the average family size was 2.99.

Red Haw State Park is located a mile east of Chariton. The park offers picnicking sites, shelters that can be reserved, camping and trails. The lake offers un-supervised swimming, fishing and electric trolling motor only boating.

Owned by the City of Chariton and located 3 miles west of Chariton on US Highway 34, the Chariton Municipal Airport has served the city and Lucas County since April 1947.

Chariton is located on

U.S. Route 34, which runs east and west to each side of the state. The city is also served by Iowa Highway 14.

The Chariton School District is the only school district in the county since 2008, when the Russell School District closed. There are two elementary schools, Columbus Elementary (K-2 grades) and Van Allen Elementary (3–5 grades); one middle school, Chariton Middle School (6–8 grades); and one high school, Chariton High School (9–12). The high school athletic teams are called the Chargers.

All content from Kiddle encyclopedia articles (including the article images and facts) can be freely used under Attribution-ShareAlike license, unless stated otherwise. Cite this article:
Chariton, Iowa Facts for Kids. Kiddle Encyclopedia.