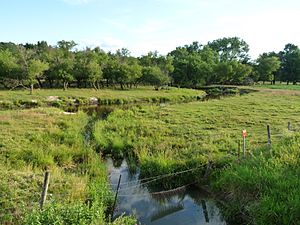 The Buffalo River is a 68.7-mile-long (110.6 km) left-tributary of the Mississippi River in western Wisconsin in the United States.

The Buffalo River is formed at Osseo in northeastern Trempealeau County by the confluence of its North and South Forks, both of which are about 16 miles (26 km) long and rise in northwestern Jackson County; the North Fork has at times been considered the main stem of the river. From Osseo, the Buffalo flows westwardly into Buffalo County, past Strum, Eleva and Mondovi. At Mondovi the river turns southwestward for the remainder of its course; it flows into the Mississippi River 2 miles (3 km) northwest of Alma.

For the last 5 miles (8 km) of the Buffalo's course, it is surrounded by marshland, before emptying into Rieck's Lake, a migratory stopover for thousands of tundra swans and other waterfowl. Rieck's Lake empties out into a riverine lake, called Buffalo Slough, part of Pool 4 on the Mississippi River.

All content from Kiddle encyclopedia articles (including the article images and facts) can be freely used under Attribution-ShareAlike license, unless stated otherwise. Cite this article:
Buffalo River (Wisconsin) Facts for Kids. Kiddle Encyclopedia.