Kids Encyclopedia Facts
Not to be confused with Menomonee Falls, Wisconsin. 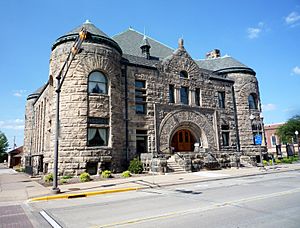 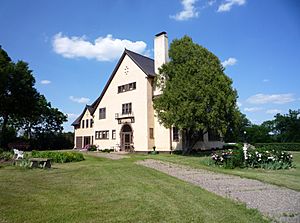 Menomonie is a city in and the county seat of Dunn County in the western part of the U.S. state of Wisconsin. The city's population was 16,264 as of the 2010 census.

Named for the original inhabitants of the area, the Menominee, the city forms the core of the United States Census Bureau's Menomonie Micropolitan Statistical Area (MSA), which includes all of Dunn County (2010 population: 43,857). The Menomonie MSA and the Eau Claire–Chippewa Falls metropolitan area to the east form the Census Bureau's Eau Claire-Menomonie Consolidated Metropolitan Statistical Area.

The city center is at the south end of Lake Menomin, a reservoir on the Red Cedar River.

The earliest known residents of the area were people from the Trempealeau Hopewell Culture of the Middle Woodland Period (1-400 AD). Evidence from their culture includes a mound from the Wakanda Mounds Group in Wakanda Park, along the western shore of Lake Menomin. Most of these mounds are thought to be from Effigy Mound cultures from this time period. Artifacts from the Late Woodland Period (400-1000 AD) have also been uncovered. It is theorized that agricultural villages supported the population during summer months, transitioning to hunting and gathering from fall through spring. The next known population group is the Santee Dakota in the 1600s and 1700s, who engaged in conflicts with the Ojibwe people, who migrated west as refugees. Armed with European weapons, the Ojibwe pushed westward, eventually winning at the Battle of Kathio in 1770. The two tribes continued their warfare, eventually signing the 1825 First Treaty of Prairie du Chien, which made a border between the two just north of Menomonie, with the Dakota claiming the southern lands.

In 1788, French-Canadian fur trader and schoolmaster Jean Baptiste Perrault established a trading post and fort on the Red Cedar River very near Menomonie.

The lumber industry brought Menomonie permanent settlement and economic prosperity in the 1800s. The Wisconsin Milling Company set up shop at the confluence of Wilson Creek and the Red Cedar River, which was purchased by Hardin Perkins, backing fur traders James H. Lockwood and Joseph Rolette in 1822 and subsequently washed away by a sudden overflow in the river. Working with Indian Agent General Street, Perkins, Lockwood and Rolette began a legal battle over the authority of the local Native American people to grant permissions of this sort, exchanging land for payment of blankets, beads, whiskey, and other merchandise to Chief Wabashaw and the other Ojibwe chiefs. In 1830 they received permission from the federal government to rebuild their lumber operation. This was the first permanent settlement on the land that became the city of Menomonie.

Lockwood built a second mill and dam on the west side of the Red Cedar River, at the confluence of Gilbert Creek. He sold this to Hiram S. Allen, a lumberman from Vermont. In 1839, Hiram S. Allen built a new sawmill in its place, which he sold to the McCann brothers, settlers from Ohio who later became the first permanent residents of Eau Claire. In 1849, the Gilbert Creek Mill became the site of the first post office.

Lockwood and Rolette sold their original operation to James Green in 1841, who turned over the deed to William Black in 1842. In 1846, William Wilson and John Holly Knapp jointly purchased the mill, naming it Black & Knapp Mill. Wilson and his family settled in the area, eventually building what is now the Wilson Place Museum in 1859. Wilson founded the city of Menomonie and became its first mayor, as well as a Wisconsin State Senator.

Captain Andrew Tainter and Henry L. Stout acquired ⅓ interest in Wilson and Knapp's company, forming Knapp, Stout & Co. in 1853, the company that would come to define the town for generations. Tainter was a silent partner, whose duties included shipping lumber down to the Mississippi River and returning with supplies. By 1873, Knapp, Stout & Co. had grown into the largest lumber corporation in the world. In 43 years, its output grew from 100,000 to 5,706,602 feet of lumber. It had 1,200 employees and owned 115,000 acres (47,000 ha) of pine forest. The post office was moved to the site of the Knapp, Stout & Co. Company in 1855, with Wilson as postmaster.

Menomonie was incorporated as a city in 1882.

The Mabel Tainter Memorial Building, a local landmark, was built in 1890 by Tainter in honor of his daughter Mabel, who had died in 1886 at the age of 19. In 1891, Wisconsin State Senator James Huff Stout, son of Henry L. Stout, founded a manual training school, the first of several educational enterprises he launched in Menomonie. These educational programs were combined into the Stout Institute in 1908, and still stand as the University of Wisconsin–Stout.

In 1901, the water mill shut down and Knapp, Stout & Co. closed operations in the area. The Wisconsin Power Company and Submerged Electric Motor Co. acquired some of the company's facilities, the latter to house the world's first outboard motor factory. In 1902, the Wilson-Weber Lumber Company took over retail operations of the Knapp, Stout & Co. That same year, Menomonie founded the first agricultural high school in the United States, the Dunn County School of Agriculture and Domestic Economy.

There were 5,743 households, of which 20.1% had children under the age of 18 living with them, 30.9% were married couples living together, 8.4% had a female householder with no husband present, 3.4% had a male householder with no wife present, and 57.3% were non-families. 36.1% of all households were made up of individuals, and 12.7% had someone living alone who was 65 years of age or older. The average household size was 2.26 and the average family size was 2.87.

It is important to remember that a large percentage of the 42% between 18 and 24 were students at the University of Wisconsin-Stout.

Menomonie was ranked #15 in Smithsonian Magazine's "The 20 Best Small Towns in America" in 2012. 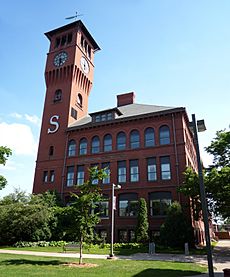 Bowman Hall at the University of Wisconsin-Stout.

Menomonie schools are part of the Menomonie Area School District.

The city is home to the University of Wisconsin–Stout and a campus of Chippewa Valley Technical College.

All content from Kiddle encyclopedia articles (including the article images and facts) can be freely used under Attribution-ShareAlike license, unless stated otherwise. Cite this article:
Menomonie, Wisconsin Facts for Kids. Kiddle Encyclopedia.