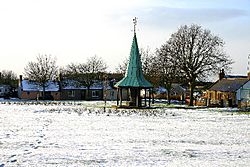 Kinnear Square lies at the South end of Laurencekirk

Laurencekirk (Scots: Lowrenkirk, Scottish Gaelic: Coinmheadh) is a small town in the old county of Kincardineshire, modern county of Aberdeenshire, Scotland, just off the A90 Dundee to Aberdeen main road which it bypassed in 1985. It is the largest settlement in the Howe o' the Mearns area and houses the local secondary school; Mearns Academy, which was awarded the Charter Mark in 2003. The 2004 population is estimated at 3,596.

Its old name was Conveth, an anglification of the Gaelic Coinmheadh, referring to an obligation to provide free food and board to passing troops. Laurencekirk is in the valley between the Hill of Garvock and the Cairn O' Mount. The famous landmark of the Johnston Tower can be seen on the peak of the Garvock.

Laurencekirk was, in the past, known for making snuff boxes with a special type of airtight hinge (known as a "Laurencekirk hinge") invented by James Sandy.

Laurencekirk Golf Club (now defunct) first appeared in the early 1900s. The club closed at the time of WW2.

Lewis Grassic Gibbon wrote much about The Mearns and the surrounding area in his book Sunset Song. A tribute centre can be visited at Arbuthnott a few miles from Laurencekirk.

The Edinburgh to Aberdeen Line passes through the town. The station, which closed to passengers in 1967, was re-opened on 17 May 2009. The opening of this station has affirmed Laurencekirk's status as a commuter town providing links to Aberdeen, Dundee and beyond.

Laurencekirk has three public houses; the Crown and The Royal attract the younger patrons while the Western is a regular haunt for the older locals. Recently the Alma Hotel has been converted to an Indian Restaurant, Bar and Indian Takeaway. There is also a Chinese takeaway and a fish and chip shop.

Amenities include a Co-operative and a Scotmid supermarket, solicitors and estate agent, Post Office, baker, butcher, hair & beauty salons, award winning photographers, pet shops, cafe and hardware/gift shop and 2 independent stores formerly the Spar and the Mace. The former Laurencekirk Mart houses various facilities including a children's play centre and beauty therapy premises. Civil amenities include a police station, a library and an extensive modern health centre. There are day care facilities and the old primary school offers a before and after school club for the children of working parents.

Laurencekirk Primary school was built in 1999 and Mearns Academy, the senior school, opened in August 2014. The Community Centre, Library and Police Station are housed within the Mearns Campus. There are two public parks, both with children's play areas, and in addition the memorial park houses a bowling green and a skate-board facility.

Younger people also have a drop-in centre called The Venue which is situated behind the Masonic Hall. There are two churches – a Church of Scotland and an Episcopalian Church – both of which have active congregations.

Representations are being made for a grade separated junction (flyover) at the south end of the A90 Laurencekirk bypass and a petition has been presented to parliament.

Laurencekirk has one famous landmark known as the "Johnston Tower" which is situated on the Garvock Hill, along side it is the new wind farm. It is used as the Primary School and Mearns Academy's school logo, in 2003 this was awarded a Charter Mark.

All content from Kiddle encyclopedia articles (including the article images and facts) can be freely used under Attribution-ShareAlike license, unless stated otherwise. Cite this article:
Laurencekirk Facts for Kids. Kiddle Encyclopedia.