Kids Encyclopedia Facts
This page is about the town in Scotland. For other uses, see Stonehaven (disambiguation).

Stonehaven is a town in Scotland. It lies on Scotland's northeast coast and had a population of 11,602 at the 2011 Census. After the demise of the town of Kincardine, which was gradually abandoned after the destruction of its royal castle in the Wars of Independence, the Scottish Parliament made Stonehaven the successor county town of Kincardineshire. It is currently administered as part of the unitary authority of Aberdeenshire. Stonehaven had grown around an Iron Age fishing village, now the "Auld Toon" ("old town"), and expanded inland from the seaside. As late as the 16th century, old maps indicate the town was called Stonehyve, Stonehive, Timothy Pont also adding the alternative Duniness. It is known informally to locals as Stoney.

Stonehaven is the site of prehistoric events evidenced by finds at Fetteresso Castle and Neolithic pottery excavations from the Spurryhillock area. The town lies at the southern origin of the ancient Causey Mounth trackway, which was built on high ground to make passable this only available medieval route from coastal points south to Aberdeen. This ancient passage specifically connected the Bridge of Dee to Cowie Castle via the Portlethen Moss and the Stonehaven central plaza. The route was that taken by the Earl Marischal and Marquess of Montrose when they led a Covenanter army of over 9000 men in the first battle of the English Civil War in 1639. Originally the settlement of Stonehaven grew and prospered and was known as Kilwhang. With 'Kil' meaning hill and 'whang' the name, or sound of a whip, possibly, the name is derived from the cliffs above the original settlement and the sound of wind whistling around their meagre shelters.

The Covenanters were imprisoned in Dunnottar Castle, where many died. A memorial to them can be found in Dunnottar Church. Other castles in the vicinity are Fetteresso Castle and Muchalls Castle, both of which are in private ownership and not open to the public. The oldest surviving structure in Stonehaven is the Stonehaven Tolbooth at the harbour, used as an early prison and now a museum.

Dunnottar Castle, perched atop a rocky outcrop, was home to the Keith family, and during the Scottish Wars of Independence, the Scottish Crown Jewels were hidden there. In 1296, King Edward I of England took the castle only for William Wallace to reclaim it in 1297, burning down the church in the process with the entire English garrison still in it. In 1650, Oliver Cromwell sacked the castle to find the Crown Jewels following an eight-month siege (having previously destroyed the English Crown Jewels). However, just before the castle fell, the Crown Jewels were smuggled out by some ladies who took them by boat to a small church just down the coast in the village of Kinneff, where they remained undetected for eleven years.

Stonehaven was a Jacobite town in the Fifteen and it was a safe base for the retreating Jacobite army to stay overnight on the night of 5–6 February 1716. In the Forty-Five Stonehaven, part of the Episcopalian north-east, was again ‘reliably Jacobite’ and it was one of the north-eastern ports where reinforcements, plus money and equipment were periodically landed from France.

Near the Cowie Bridge, at the north of Stonehaven, was a fishing village known as Cowie, which has now been subsumed into Stonehaven. Somewhat further north are the ruins of Cowie Castle. Slightly to the west of Stonehaven is the ruined Ury House, originally a property of the Frasers.

A fossil of the oldest known land animal, Pneumodesmus newmani, a species of millipede, was found at Stonehaven's Cowie Beach in 2004. 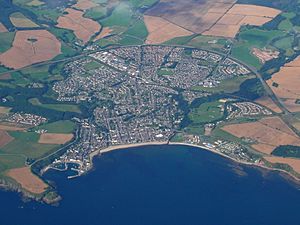 Stonehaven from the air

Stonehaven is 15 miles (24 km) south of Aberdeen in a sheltered position on Stonehaven Bay between the Carron Water and the Cowie Water. Stonehaven lies adjacent to a deeply indented bay surrounded on three sides by higher land between Downie Point and Garron Point. The harbour, consisting of two basins, was improved in the 1820s by the engineer Robert Stevenson (grandfather of the author Robert Louis Stevenson) and became an important centre of the 19th century herring trade; the harbour is bordered on the north by Bellman's Head and at the south by Downie Point. At the western edge of Stonehaven west of the A90 road lies the village of Kirkton of Fetteresso. Nearby to the south, Fowlsheugh is a coastal nature reserve, known for its 230 foot high cliff formations and habitat supporting prolific seabird nesting colonies.

Stonehaven has grown rapidly since the oil boom in Aberdeen. The increasing demand for new, middle class housing has seen four new estates being appended to the town, creating an expanse of suburbs and Stonehaven has been bypassed since 1984.

Because of its location at the confluence between two rivers, Stonehaven is prone to flooding following heavy rain. Aberdeenshire Council has held meetings about the possible construction of flood defences. 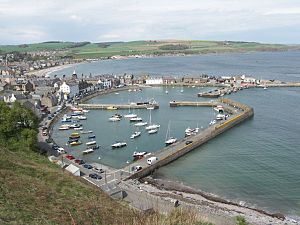 Historically the chief commerce of Stonehaven lay in fishing. Led by the herring fishery, the catch peaked around the year 1894 with a peak catch of about 15 million fish per annum and an employment in the fishing industry of 1280 people. Due to overfishing to serve the expanding regional population, the fishing industry declined with diminishing catches, such that by 1939 only a remnant of the earlier fishing fleet continued to exist, and the catch mostly supported the local population from that point onward.

At present day the town's primary industries are marine services and tourism, with Dunnottar Castle, a local landmark, bringing in a large number of tourists every year. Dunnottar Castle is regularly used in promotional material by the Scottish tourism industry; in addition, it was used in the 1990 film Hamlet, and appeared as a featured desktop background in the UK edition of Microsoft Windows 7. Another attractive feature of the town is the long beach facing the North Sea, with large cliffs at either end sheltering small rock pools and inlets. It is also famous for its olympic-sized outdoor swimming pool, which is heated and filled with a mixture of tap water and filtered seawater. The local harbour features the Tolbooth, the town's small museum of local heritage. 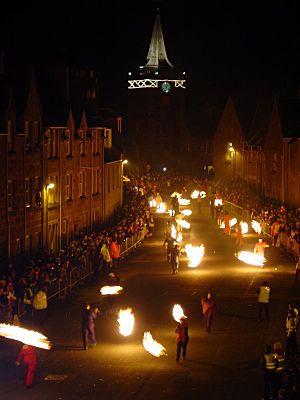 During Hogmanay festivities, the High Street comes alive with crowds watching the annual fireballs ceremony, in which volunteers walking down the High Street swing huge balls of fire around and around at the ends of chains. The Fireball Festival was part of the content of STV's Hogmanay coverage. The fireballs are finally thrown into the harbour. Stonehaven's long established pipe band plays at events throughout the year, including the folks festival and fireball ceremony. The band has competed at various levels throughout its illustrious history including several years at the prestigious Grade 1.

The town's Haven Fish Bar was the likely origin of the Deep-fried Mars Bar, a snack now culturally associated with Scotland - and its health record - as a whole. In 2012, the (since renamed) Carron fish and chip shop sold around 100–150 deep-fried Mars bars per week, with tourists accounting for around 70% of this figure.

On Tuesday 11 June 2013, it was decided by the Justice Committee that Stonehaven Sheriff Court would be closed. This was despite a petition attracting nearly 300 signatures and disagreement from the local community.

Every July Stonehaven holds a Highland Games. All those competing in the heavy events (which include the Hammer, the Heavy Stone and Tossing the Caber) must wear full Highland dress. Other events include the Stonehaven Folk Festival regularly attended by famous Glaswegian comedian Billy Connolly. On the first Saturday in June the Feein' Market recreates a 19th-century agricultural hiring fair. The RW Thomson Classic Car Rally is an annual celebration of the inventor of the pneumatic tyre and attracts an impressive range of vintage and classic cars. There are two harbour festivals each summer. A farmers' market is now held once a month in the market square where local food suppliers and producers can sell fresh fruit, vegetables, poultry and other types of meat.

Stonehaven has one of the largest purpose built radio controlled car circuits in the UK, located at the far end of Mineralwell Park. John McRoberts Pavilion was opened in the park in 1993. The park is now home to a parkrun.

Stonehaven has a Local Community Radio Station, Mearns FM. Broadcasting from Stonehaven Town Hall to the town and surrounding area, the station aims to help keep Stonehaven, Inverbervie and Laurencekirk up to date with local and charity events, as well as playing music. Staffed completely by volunteers, it is run as a not-for-profit organisation, broadcasting under a community radio licence, with a remit to provide locally focused news, events and programming. Jointly funded by local adverts and local and national grants, Mearns FM has one of the largest listening areas of any community radio station owing to the Mearns' distributed population.

Stonehaven was the birthplace of Robert William Thomson, inventor of the pneumatic tyre and the fountain pen. It is also the birthplace of journalists James Murdoch, Lord Reith of Stonehaven, first Director-General of the BBC and Tom McEwen, a Canadian communist politician and trade union organiser.

The novelist Lewis Grassic Gibbon (James Leslie Mitchell) attended school at what was the old Mackie Academy (now Arduthie Primary). As a state secondary school, Mackie Academy now serves over 1,000 pupils and they study his work.

Famous historical visitors include William Wallace and Mary, Queen of Scots. Poet Robert Burns spent a couple of days there with relatives in 1787.

Part-time amateur explorer Luke Robertson became the first Scot and youngest British person to trek solo, unassisted and unsupported to the South Pole in 2015 and 2016.

The town has a secondary school, Mackie Academy, which was founded at the site occupied currently by Arduthie School. Mackie takes pupils from a relatively large chunk of southern Aberdeenshire with its catchment zone stretching from Johnshaven in the south to Netherley in the north and out to Glenbervie in the west.

There are three primary schools:

One special education school, Carronhill, opened in 1975. It is situated in the newer part of the town near Mill O' Forest Primary School. 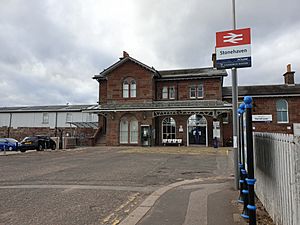 The town has been served by Stonehaven railway station on the Dundee–Aberdeen line since 1849. Initially located outside the town, Stonehaven has since grown and has absorbed the station. The A90 road bypasses the town, and meets the A92 here. The town has a local service and is also on the X7 Coastrider route between Aberdeen and Perth. A locally run Land Train runs from the town square to the outdoor pool, Dunnottar Castle and the harbour.

Stonehaven was the birthplace of Robert William Thomson, inventor of the pneumatic tyre. It is also the birthplace of journalists James Murdoch, Lord Reith of Stonehaven, first Director-General of the BBC and Tom McEwen, a Canadian communist politician and trade union organiser.

John Ellis, architect was born and lived here, responsible for many local buildings including the War Memorial.

Ury House, Stonehaven, is the ancestral seat of the Viscounts Stonehaven. It was built by Sir Alexander Baird, 1st Baronet in 1885.

All content from Kiddle encyclopedia articles (including the article images and facts) can be freely used under Attribution-ShareAlike license, unless stated otherwise. Cite this article:
Stonehaven Facts for Kids. Kiddle Encyclopedia.