A deep-fried Mars bar is a Mars-brand chocolate bar covered in batter then deep fried in oil. The dish originated at a chip shop in Scotland as a novelty item. Since various mass media began reporting on the practice in the mid-1990s – often as a critical commentary on the healthfulness of the urban Scottish diet – the popularity of the dish has spread.

The dish is prepared using standard commercial Mars bars. The chocolate bar is typically chilled before battering, to prevent it from excessively melting as it is fried. It is coated in flour batter of the type commonly used for deep-frying fish, sausages, and other similar foods, then immersed in boiling fat or oil, until the batter is cooked. 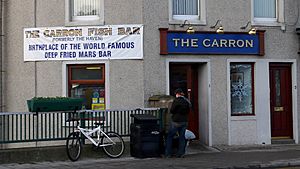 A banner on The Carron Fish Bar in Stonehaven, reading "Birthplace of the World Famous Deep Fried Mars Bar", December 2007

The creation of the dish is attributed to John Davie, who invented it in 1992 in The Haven Chip Bar (now The Carron) in Stonehaven, near Aberdeen on Scotland's northeast coast. It received rapidly escalating media attention after Aberdeen Evening Express writer Alastair Dalton reported on 23 August 1995, "HOT chocolate has become this summer’s sizzler in Stonehaven chip shop. Mars Bars, deep-fried in batter, are being snapped up by sweet-toothed teenagers. The craze started when the school holidays began and has quickly taken hold says Ingram Mowatt (41), owner of The Haven, Allardice Terrace. " The article included a quote from Mars spokesperson who said this was the most unusual way they had come across of enjoying a Mars bar. The following day the story was picked up and run in the Daily Record in an article titled "Mars supper, please". Scottish broadsheets The Herald and The Scotsman ran the story the following day and the UK broadsheets the day after, each adding their own cultural slant. On the fifth day, Keith Chegwin performed taste tests on The Big Breakfast TV programme and the story was covered by the BBC World Service. 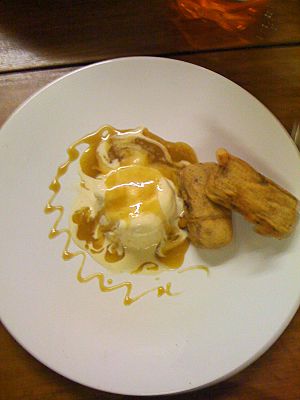 After the food was mentioned in 2004 by Jay Leno on NBC's Tonight Show in the United States, The Lancet commissioned the University of Dundee to validate the association between Scotland and the deep-fried Mars bar. It undertook a telephone questionnaire survey of 627 fish and chip shops in Scotland, 62% of which responded, and found:

In 2012, the originating Carron Fish Bar estimated sales of 100–150 deep-fried Mars bars per week, but that 70% were sold to visitors who have heard of its reputation. 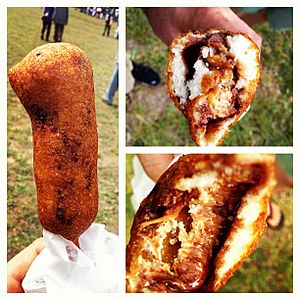 A deep-fried Snickers in the United States, at various stages of consumption

In 2000, Scottish chef Ross Kendall included the bars on the menu of Le Chipper restaurant in Paris.

The deep-fried Mars bar has also given rise to the frying of other confections, for example, Reiver's Fish Bar in Duns annually advertises an Easter special of deep-fried Creme Egg. Deep-fried Snickers have also been reported, particularly in the United States where the Mars bar is not common and differs from the bar sold in the UK; it is popular at state fairs and similar events. In her 1999 book and television series Nigella Bites, Nigella Lawson includes a recipe for a deep-fried Bounty bar. Deep-fried Moro bars are also sold in New Zealand, where the brand is popular.

Symbol of an unhealthy diet

Since the Daily Record described it as "Scotland's craziest takeaway", the deep-fried Mars bar has become a symbol for ill health, obesity and high-fat diets. The original article was quickly followed up by other UK publications, with the food portrayed to speak eloquently about Scotland's and the wider UK's poor diet, and resultant levels of obesity.

In 2012, the Haven sought an application for protected geographical indication under the EU's Protected Food Name Scheme. But Mars wrote to the fish bar asking it to make plain that deep-frying of the bars was "not authorised or endorsed" by Mars, and an agreed disclaimer statement was put up in both the shop and in its menu.

In a 2012 interview, Glasgow restaurateur John Quigley felt that Scotland had been trying to "shake off" its unhealthy image for 20 years, since the media coverage of the deep-fried Mars bar.

All content from Kiddle encyclopedia articles (including the article images and facts) can be freely used under Attribution-ShareAlike license, unless stated otherwise. Cite this article:
Deep-fried Mars bar Facts for Kids. Kiddle Encyclopedia.