Portlethen (/pɔərtˈlɛθən/; Scottish Gaelic: Port Leathain) is a town located approximately 7 miles south of Aberdeen, Scotland along the A90. The population according to the 2011 census was 7,130 making it the seventh most populous settlement within Aberdeenshire.

To the east of Portlethen lie three fishing villages: Findon, Downies and Portlethen Village (now often referred to as Old Portlethen). Although Portlethen has been granted official town status, it resembles a residential suburb without a clear 'town centre' or focal point.

Portlethen is a coastal town lying along the North Sea coast. A small island May Craig is situated off shore from Portlethen. Portlethen is located in the historic county of Kincardineshire.

Portlethen was originally a small fishing village. The harbour is located in what is now Old Portlethen, the original village on the coast about a half a mile east from Portlethen Parish Church. 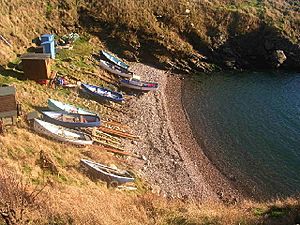 An inlet on the North Sea at Portlethen, historically used as Portlethen Harbour.

Portlethen lies about two kilometres east of the ancient Causey Mounth road, which was built on high ground to make passable this only available medieval route across the Mounth from coastal points south to Aberdeen. This ancient passage specifically connected the Bridge of Dee with Muchalls Castle and Stonehaven to the south. The route was that taken by the William Keith, 7th Earl Marischal and James Graham, 1st Marquess of Montrose when they led a Covenanter army of 9000 men in the first battle of the Civil War in 1639. Portlethen has expanded very rapidly. In the 1980s a new retail park was constructed. Portlethen is still continuing to expand into a sizable town.

The Webb chicken was first bred on a farm to the west of Portlethen in the 1920s. The Webb and its related breeds are popular choices with free range farmers due to their natural disinclination to roost in trees and shrubs.

Much of modern-day Portlethen has been built over the Portlethen Moss Nature Reserve, formerly home to the northern crested newt and the Red-spotted newt. The remainder of Portlethen Moss is approximately one quarter of the size it was twenty years ago. Groups such as the Portlethen Moss Conservation Group were created specifically to maintain the area for the use of future generations. 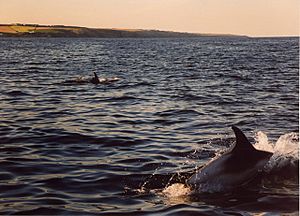 Portlethen has two all-weather concrete tennis courts, a bowling green with public and private sessions, a swimming pool and a private members' golf club. It is also home to the Lethen Archers club.

Portlethen Golf Club was founded in 1981, and a championship course designed by Donald Steel opened for play in 1989. The club is owned by its members. The club's first professional player was Muriel Thomson who, when she was appointed in 1990, was the first female golf professional in Scotland. In December 2014 she was succeeded by Stuart Wilson. The course is a 6,663 yards par 72 with two par 3s and two par 5s in each half (providing a par 3 and a par 5 facing each of north, south, east and west) to complement five par 4s in each half. The clubhouse has practice facilities, including a covered driving range, practice bunkers, short-game area and putting green. In 2011, Portlethen won the Aberdeen and District Pennant League for the first time. The 2012 Club Champion was Keith Horne, who went on to win the North East Champion of Champions Trophy. Club Champion in both 2013 and 2014 was Clark Brechin and the championship was won by Kevin Daglish in 2015. In 2016, Clark Brechin regained the championship, his seventh victory.

There are two main parks in Portlethen: Bourtree Park and Nicol Park. Nicol Park has a toddlers park, a skate park and two basketball courts. Bourtree Park has a football pitch and a few swings and climbing frames. There are currently plans to create a new "green area"/park in the north end of Portlethen. There are also several small parks containing swings and climbing frames throughout Portlethen.

There is a train station in Portlethen. According to the Portlethen corridor capacity study, carried out in 2008, services to Portlethen station are too infrequent, but ScotRail introduced an increased frequency from December 2012. There are now nine trains to Aberdeen per day, as well as direct trains to Dundee, Edinburgh and Glasgow.

Portlethen is connected by direct bus routes to Aberdeen in the north, and Newtonhill and Stonehaven in the south. Buses are operated by Stagecoach Bluebird.

The Portlethen & District Community Council (PDCC) was officially reformed on 30 November 2007. It meets monthly in Portlethen Academy, normally on the fourth Tuesday of each month and considers many issues including development proposals and transport. Meetings are open to the public and offer an opportunity to raise topics of relevance to the local community. Portlethen Gala is a social and community event held every summer on the last Saturday in August.

All content from Kiddle encyclopedia articles (including the article images and facts) can be freely used under Attribution-ShareAlike license, unless stated otherwise. Cite this article:
Portlethen Facts for Kids. Kiddle Encyclopedia.