San Rafael ( SAN rə-FELL; "Saint Raphael") is a city and the county seat of Marin County, California, United States. The city is located in the North Bay region of the San Francisco Bay Area. As of the 2010 census the city's population is 57,713.

What is now San Rafael was once the site of several Coast Miwok villages; Awani-wi, near downtown San Rafael, Ewu, near Terra Linda, and Shotomko-cha, in Marinwood. Mission San Rafael Arcángel was founded in what is now downtown San Rafael as the 20th Spanish mission in the colonial Mexican province of Alta California by three priests—Father Narciso Durán from Mission San José, Father Abella from Mission San Francisco de Asís, Father Luis Gíl y Taboada from La Iglesia de Nuestra Señora Reina de los Angeles—on Dec. 14, 1817, four years before Mexico gained independence from Spain. Mission San Rafael Arcángel was located a donkey's day walk to the mission below it. The mission and the city are named after the Archangel Raphael, the Angel of Healing.

The mission was originally planned as a hospital site for Central Valley American Indians who had become ill at the cold San Francisco Mission Dolores. Father Luis Gil, who spoke several Native American languages, was put in charge of the facility. In part because of its ideal weather, San Rafael was later upgraded to full mission status in 1822. The mission had 300 converts within its first year, and 1,140 converts by 1828. The Mexican government took over the California missions in 1834, and Mission San Rafael was abandoned in 1844, eventually falling into ruin. The current mission was built in 1949 in the style of the original, but faces at right angles to the alignment of the original.

The San Francisco and North Pacific Railroad reached San Rafael in 1879 and was linked to the national rail network in 1888. The United States Navy operated a San Pablo Bay degaussing range from San Rafael through World War II.

There are several public parks in the city.

The San Rafael shoreline has been historically filled to a considerable extent to accommodate land development, with underlying bay mud (saturated clayed silt) of up to 90 feet (27 m) in thickness. At certain locations such as Murphys Point, the sandstone or shale rock outcrops through the mud.

San Rafael has a wide diversity of natural habitats from forests at the higher elevations to marshland and estuarine settings. Its marshes are home to the endangered species Salt Marsh Harvest Mouse. There are also riparian areas including the San Rafael Creek and Miller Creek corridors. 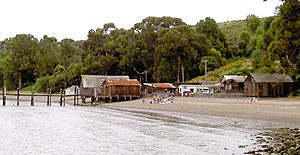 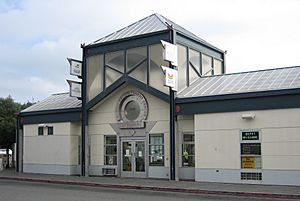 The major north-south freeway through San Rafael is U.S. Route 101, connecting the North Coast (California) and the Redwood Empire to the north, and San Francisco to the south. Interstate 580 heads across the Richmond–San Rafael Bridge to the East Bay.

Commuter train service to the Santa Rosa Airport will be started in 2016. By 2018, its extension to the south to Larkspur is expected to be completed.

All content from Kiddle encyclopedia articles (including the article images and facts) can be freely used under Attribution-ShareAlike license, unless stated otherwise. Cite this article:
San Rafael, California Facts for Kids. Kiddle Encyclopedia.