Mission San Rafael Arcángel is a Spanish mission in San Rafael, California. It was founded in 1817 as a medical asistencia ("sub-mission") of Mission San Francisco de Asís. It was a hospital to treat sick Native Americans, making it Alta California's first sanitarium. The weather was much better than in San Francisco, which helped the ill get better. It was not intended to be a stand-alone mission, but nevertheless grew and prospered and was granted full mission status on October 19, 1822.

Mission San Rafael Arcángel was founded on December 14, 1817, by Father Vicente Francisco de Sarría, as a medical asistencia ("sub-mission") of the San Francisco Mission to treat their sick population. It was granted full mission status in 1822.

This was one of the missions turned over to the Mexican government in 1833 after the Mexican secularization act of 1833. In 1840, there were 150 Indians still at the Mission. By 1844, Mission San Rafael Arcángel had been abandoned; what was left of the empty buildings was sold for $8,000 in 1846. The Mission was used by John C. Fremont as his headquarters during the Bear Flag Revolt.

In 1847, a priest was once again living at the Mission. A new parish church was built near the old chapel ruins in 1861, and, in 1870, the rest of the ruins were removed to make room for the City of San Rafael. All that was left of the Mission was a single pear tree from the old Mission's orchard. It is for this reason that San Rafael is known as the "most obliterated of California's missions".

In 1949, a replica of the chapel was built next to the current Saint Raphael's Church on the site of the original hospital in San Rafael, California which was built in 1919. 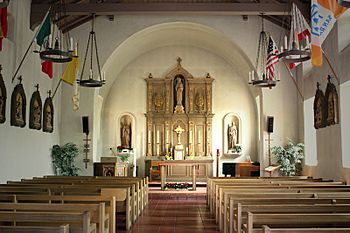 Interior of the capilla (chapel) at Mission San Rafael Arcángel taken in 1974.

All content from Kiddle encyclopedia articles (including the article images and facts) can be freely used under Attribution-ShareAlike license, unless stated otherwise. Cite this article:
Mission San Rafael Arcángel Facts for Kids. Kiddle Encyclopedia.