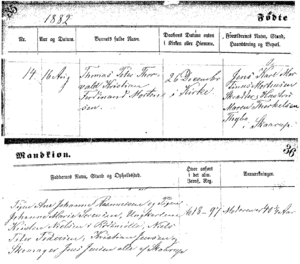 Thomas Peter Thorvald Kristian Ferdinand Mortensen (August 16, 1882 – April 25, 1998), known as an adult as Christian Mortensen, was a Danish-American supercentenarian. Having died at the age of 115 years and 252 days, Mortensen is listed as the second oldest man ever verified by the Guinness World Records. The Guinness Book of World Records previously ranked him second to Shigechiyo Izumi, whose age was later disputed. Guinness World Records eventually disregarded Izumi from their records, listing Mortensen as the oldest man ever verified. Mortensen however lost this title on December 28, 2012 when Japanese man Jiroemon Kimura lived to be older than him.

Mortensen was baptised in Fruering Church on December 26, 1882. Besides his baptismal record, other records include the 1890 and 1901 census enumerations in Denmark, and church confirmation in 1896.

All content from Kiddle encyclopedia articles (including the article images and facts) can be freely used under Attribution-ShareAlike license, unless stated otherwise. Cite this article:
Christian Mortensen Facts for Kids. Kiddle Encyclopedia.