Description and comparison to similar species

This species is nocturnal, with particularly noted activity on moonlit nights. This mouse is particularly resourceful, making use of ground runways of other rodents; moreover, it also exhibits climbing agility. It occupies marsh habitats where pickleweed and marsh plants abound. Its many predators include hawk, snake and owl species, as well as shorebirds and larger mammals. Predation by domestic cats is an issue due to encroachment of the limited habitat by humans at the perimeter of the San Francisco Bay.

As would be expected of a mouse native to salt marshes, this species is a competent swimmer and is tolerant of salt in its diet and water supply. It eats seeds and plants, especially pickleweed and glasswort, one of the most common salt marsh plant species.

Survey data from Suisun Marsh found that the salt marsh harvest mouse can live up to 18 months and possibly longer. Females commonly have two litters per year. In the summer, when salinity of water and vegetation increases, the mice have a notable advantage due to their ability to drink and survive purely on salt water. The northern species can survive purely on salt water, but prefers fresh to salt water. The southern species can survive on either, and does not display a preference.

The mice depend heavily on vegetation cover, particularly pickleweed and tules (Schoenoplectus spp.). Pickleweed (Salicornia virginica) is their primary and preferred habitat, as well their main food source, but R. raviventris is found in a variety of marsh habitats, including diked and tidal wetlands. Salt marsh harvest mice are not an aggressive species; many mice live in close quarters, withstanding short durations of high population density due to seasonal flooding that restricts individuals to small patches of dry ground. They can also survive tidal or seasonal flooding due to their superior ability to swim, float and climb.

The home range and habitat use of this species differ temporally across age and sex. Juveniles exhibit home ranges of 600–700 m2, whereas adults exhibit home ranges of 1300–1500 m2. Males and females also differ in the structural complexity of their occupied habitat during fall and summer (breeding season), but occupy the same habitat during winter and spring. While the cause is still unknown, this seasonal disparity in habitat use may be related to a reduced risk of predation and intraspecific competition in more structurally complex habitats. Furthermore, movement of R.raviventris individuals within their home ranges varies seasonally, with mean distance traveled highest in June and lowest in November. 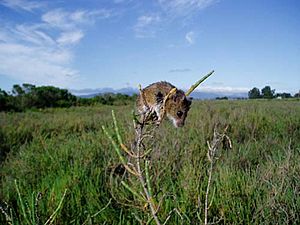 The salt marsh harvest mouse is an endangered species endemic to the San Francisco Bay. Its salt marsh habitat could be highly impacted by sea-level rise.

This organism is known to be found in these specific locales:

The salt marsh harvest mouse has lost much of its habitat to extensive development of bayside marshland, pollution, boat activity, and commercial salt harvesting. It has been on the endangered lists since the 1970s, and has protected habitat within numerous Bay Area wildlife refuges. Individual political jurisdictions have conducted research and established habitat protection strategies to protect the salt marsh harvest mouse. For example, the city of San Rafael, California, has established a shoreline setback standard to prevent any land development within 50 feet of the shoreline; this measure has been applied to several specific land developments along the San Francisco Bay shoreline. Researchers, such as Katherine Smith of California Department of Fish and Wildlife, are at the forefront of research helping to identify how threats like climate change impact the species, while increasing the understanding of its biology, ecology, and behavior.

The preservation of the salt marsh harvest mouse habitat was a subject of discussion in 2009 economic stimulus package. The mouse was mentioned numerous times in Congress by Republicans such as Rep. Mike Pence and Rep. Dan Lungren to highlight the wasteful spending of the bill. It was claimed that $30M of the 2009 economic stimulus would be spent on habitat restoration to protect the mouse. The rumor was apparently started by Michael Steel, press secretary for John Boehner. This was disputed in a San Francisco Chronicle article by Democratic Rep. Jackie Speier.

All content from Kiddle encyclopedia articles (including the article images and facts) can be freely used under Attribution-ShareAlike license, unless stated otherwise. Cite this article:
Salt marsh harvest mouse Facts for Kids. Kiddle Encyclopedia.