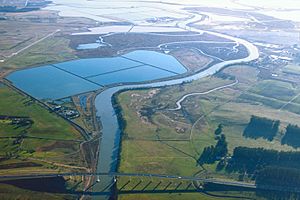 The Napa Sonoma Marsh is a wetland at the northern edge of San Pablo Bay, which is a northern arm of the San Francisco Bay in California, United States. This marsh has an area of 48,000 acres (194 km2), of which 13,000 acres (53 km2) are abandoned salt evaporation ponds. The United States Government has designated 13,000 acres (53 km2) in the Napa Sonoma Marsh as the San Pablo Bay National Wildlife Refuge.

The marsh is a productive estuarine ecosystem providing habitat for a wide diversity of flora and fauna, including numerous rare and endangered species such as the California clapper rail and California freshwater shrimp. Because of its rich avafaunal content, the Napa Sonoma Marsh is one of only seven marshes selected for intensive study by the Point Reyes Bird Observatory (based on a total of 50 discrete marshes appurtenant to the San Francisco Bay).

During the Vietnam War, the Navy utilized the marsh as a training ground for crews of the Navy's new Swift boats and patrol boats, operating out of Mare Island Naval Shipyard at the marsh's southern terminus.

An extensive research literature base exists for the Napa Sonoma Marsh.

All content from Kiddle encyclopedia articles (including the article images and facts) can be freely used under Attribution-ShareAlike license, unless stated otherwise. Cite this article:
Napa Sonoma Marsh Facts for Kids. Kiddle Encyclopedia.