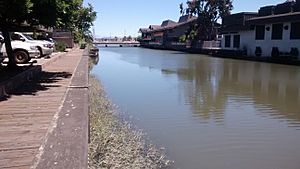 Most of the soils in the lower watershed are clays and bay mud, resulting in a low transmissivity of groundwater. Typical vertical soil profiles in the lower watershed are four to five feet of imported fill over 60 to 65 feet (18–20 meters) of bay mud set on a basement of Franciscan Sandstone bedrock. At the mouth of San Rafael Creek, situated on the south bank, is Pickleweed Park, where shorebirds can be seen, particularly in the winter migration season.

All content from Kiddle encyclopedia articles (including the article images and facts) can be freely used under Attribution-ShareAlike license, unless stated otherwise. Cite this article:
San Rafael Creek Facts for Kids. Kiddle Encyclopedia.