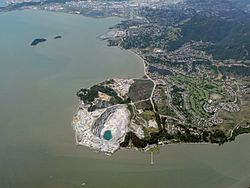 San Pablo Bay is the northern bay section of the larger San Francisco Bay, in the North Bay region.

San Rafael Bay is located along the Marin County coast, adjacent to the City of San Rafael.

The Marin Islands are within bay. The river mouth and estuary of San Rafael Creek is located at its shoreline.

All content from Kiddle encyclopedia articles (including the article images and facts) can be freely used under Attribution-ShareAlike license, unless stated otherwise. Cite this article:
San Rafael Bay Facts for Kids. Kiddle Encyclopedia.