Irn-Bru ( "iron brew") is a Scottish carbonated soft drink, often described as "Scotland's other national drink" (after whisky). It is produced in Westfield, Cumbernauld, North Lanarkshire, by A.G. Barr of Glasgow, since moving out of their Parkhead factory in the mid-2000s, and at a second manufacturing site in Mansfield, Nottinghamshire, England. In addition to being sold throughout the United Kingdom, Barr's Irn-Bru is available throughout the world and can usually be purchased where there is a significant community of people from Scotland. Innovative and sometimes controversial marketing campaigns have kept it as the number one selling soft drink in Scotland, where it competes directly with global brands such as Coca-Cola and Pepsi.

Irn-Bru is known for its bright orange colour. As of 1999 it contained 0.002% of ammonium ferric citrate, sugar, 32 flavouring agents including caffeine and quinine (but not in Australia), and two controversial colourings (Sunset Yellow FCF and Ponceau 4R). 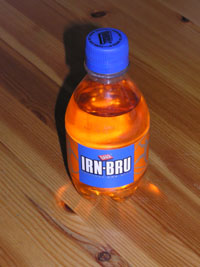 The first Iron Brew drink was produced by the Maas & Waldstein chemicals company of New York in 1889 under the name IRONBREW. The drink was popular across North America and was widely copied. A similar beverage was launched in 1898 by London essence firm Stevenson & Howell who supplied soft drinks manufacturers in the UK and colonies. Following this date many local bottlers around the UK began selling their own version of the beverage.

Barr is changing the formula in January 2018 in response to a sugar tax, to be implemented in April 2018, intended to combat obesity. By reducing the sugar content below 5g per 100ml, Barr will make Irn-Bru exempt from the new tax. The manufacturer asserts that most people will not be able to tell the difference in flavour between the old and new formulas, but fans of the drink have started the 'Save Real Irn-Bru' campaign to stop or reverse this change, and have been stocking up on the more sugary formula.

All content from Kiddle encyclopedia articles (including the article images and facts) can be freely used under Attribution-ShareAlike license, unless stated otherwise. Cite this article:
Irn-Bru Facts for Kids. Kiddle Encyclopedia.