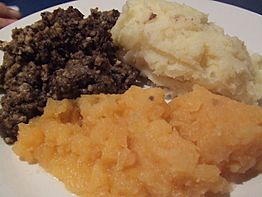 Scottish cuisine encompasses the cooking styles, traditions and recipes associated with Scotland. It has distinctive attributes and recipes of its own, but also shares much with British and wider European cuisine as a result of local, regional, and continental influences—both ancient and modern.

Scotland's natural larder of vegetables, fruit, oats, fish and other seafood, dairy products and game is the chief factor in traditional Scottish cooking, with a high reliance on simplicity and minimal seasoning, without the rare and historically expensive spices found abroad.

Scotland, with its temperate climate and abundance of indigenous game species, has provided a cornucopia of food for its inhabitants for millennia. The wealth of seafood available on and off the coasts provided the earliest settlers with their sustenance. Agriculture was introduced, with primitive oats quickly becoming the staple.

From the journeyman down to the lowest cottar, meat was an expensive commodity, and would be consumed rarely. For the lower echelons of mediaeval Scots, it was the products of their animals rather than the beasts themselves which provided nourishment.

This is evident today in traditional Scots fare, with its emphasis on dairy produce. It would appear that the average meal would consist of a pottage of herbs and roots (and when available some meat, usually seafood, or stock for flavouring), with bread and eggs, cheese or kelp when possible. Pigs were seen as an unlucky animal in many coastal areas and were neither kept, nor consumed in these areas up until the early 1900s.

In common with many mediaeval European neighbours, Scotland was a feudal state for a greater part of the second millennium. This put certain restrictions on what one was allowed to hunt, therefore to eat. In the halls of the great men of the realm, one could expect venison, boar, various fowl and songbirds, expensive spices (pepper, cloves, cinnamon, etc.), and the meats of domesticated species.

Before Sir Walter Raleigh's introduction of the potato to the British Isles, the Scots' main source of carbohydrate was bread made from oats or barley. Wheat was generally difficult to grow because of the damp climate. Food thrift was evident from the earliest times, with excavated middens displaying little evidence of anything but the toughest bones. All parts of an animal were used.

The mobile nature of Scots society in the past required food that should not spoil quickly. It was common to carry a small bag of oatmeal that could be transformed into a basic porridge or oatcakes using a girdle (griddle). It is thought that Scotland's national dish, haggis, originated in a similar way: A small amount of offal or low-quality meat, carried in the most inexpensive bag available, a sheep or pig's stomach. It has also been suggested that this dish was introduced by Norse invaders who were attempting to preserve their food during the long journey from Scandinavia.

During the Late Middle Ages and early modern era, French cuisine played a role in Scottish cookery due to cultural exchanges brought about by the "Auld Alliance", especially during the reign of Mary, Queen of Scots. Mary, on her return to Scotland, brought an entourage of French staff who are considered responsible for revolutionising Scots cooking and for some of Scotland's unique food terminology.

With the growth of sporting estates and the advent of land enclosure in the 18th century, harvesting Scotland's larder became an industry. The railways further expanded the scope of the market, with Scots grouse at a premium (as today) on English menus shortly after the Glorious Twelfth.

The availability of certain foodstuffs in Scotland, in common with the other parts of the United Kingdom, suffered during the 20th century. Rationing during the two World Wars, as well as large-scale industrial agriculture, limited the diversity of food available to the public. Imports from the British Empire and beyond did, however, introduce new foods to the Scottish public.

During the 19th and 20th centuries there was large-scale immigration to Scotland from Italy, and later from the Middle East, India, and Pakistan. These cultures have influenced Scots cooking dramatically. The Italians reintroduced the standard of fresh produce, and the later comers introduced spice. With the enlargement of the European Union in the early years of the 21st century, there has been an increase in the population of Eastern European descent, from Poland in particular. A number of speciality restaurants and delicatessens catering for the various new immigrants have opened in the larger towns and cities.

These dishes and foods are traditional to or originate in Scotland. 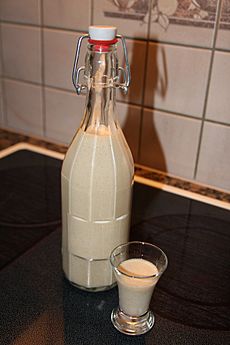 Scotland's reputation for coronary and related diet-based diseases is a result of the wide consumption of fast food since the latter part of the 20th century. Fish and chip shops remain extremely popular, and indeed the battered and fried haggis supper remains a favourite. In the area around Edinburgh, the most popular condiment for chip shop meals is "salt and sauce", the sauce element consisting of brown sauce thinned with water and vinegar. However in Glasgow, and elsewhere, chippy sauce is unknown and ketchup or salt and vinegar are preferred, prompting light-hearted debate on the merits of the options among the cities' residents, who tend to find the alternative a baffling concept.

Outlets selling pizzas, kebabs, pakoras and other convenience foodstuffs have also become increasingly popular, with an extreme example of this style of food being the Munchy box.

In addition to independent fast-food outlets, in the 1960s American-style burger bars and other restaurants such as Wimpy were introduced, and in the 1980s, McDonald's, Burger King, Pizza Hut and Kentucky Fried Chicken appeared in Scotland, followed by a large number of Subway franchises in the early 21st century. Branches of Greggs offering cakes, pastries and sandwiches are also very commonly found on the high streets of Scotland, often alongside smaller competing bakeries.

All content from Kiddle encyclopedia articles (including the article images and facts) can be freely used under Attribution-ShareAlike license, unless stated otherwise. Cite this article:
Scottish cuisine Facts for Kids. Kiddle Encyclopedia.