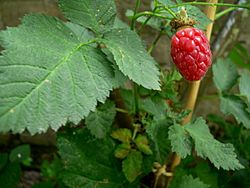 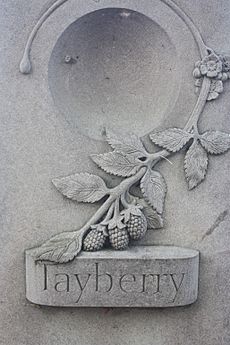 Carving of a Tayberry, on the banks of the River Tay in Perth

A tayberry is a cross between a blackberry and a red raspberry. The genetic cross was patented in 1979.

It is a cultivated shrub in the genus Rubus of the family Rosaceae. It was named after the River Tay in Scotland. The fruit is sweeter, much larger, and more aromatic than that of the loganberry. The loganberry is itself a blackberry and red raspberry cross.

The fruit do not pick easily by hand and cannot be machine harvested. They have not become a commercially grown berry crop. This plant has gained the Royal Horticultural Society's Award of Garden Merit.

All content from Kiddle encyclopedia articles (including the article images and facts) can be freely used under Attribution-ShareAlike license, unless stated otherwise. Cite this article:
Tayberry Facts for Kids. Kiddle Encyclopedia.