Bannock is a variety of flat quick bread or any large, round article baked or cooked from grain. A bannock is usually cut into sections before serving.

The word "bannock" comes from Northern and Scots dialects. The Oxford English Dictionary states the term stems from panicium, a Latin word for "baked dough", or from panis, meaning bread. It was first referred to as "bannuc" in early glosses to the 8th century author Aldhelm (d. 709), and its first cited definition in 1562. Its historic use was primarily in Ireland, Scotland and Northern England. The Scottish poet Robert Burns mentions bannock in his Epistle to James Tennant of Glenconner, in reference to Alexander Tennant. 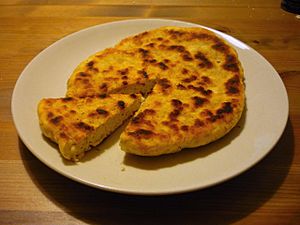 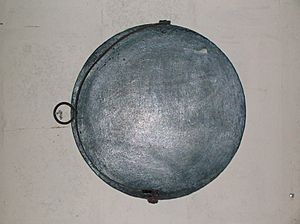 A griddle (girdle) from Dalgarven Mill in North Ayrshire, used for baking bannocks and oat cakes

The original bannocks were heavy, flat cakes of unleavened barley or oatmeal dough formed into a round or oval shape, then cooked on a griddle (or girdle in Scots). In Scotland, before the 19th century, bannocks were cooked on a bannock stane (Scots for stone), a large, flat, rounded piece of sandstone, placed directly onto a fire, used as a cooking surface. Most modern bannocks are made with baking powder or baking soda as a leavening agent, giving them a light and airy texture. There is a suggestion that bannock cakes played a pivotal role in the deciding of a person for human sacrifice during the late Iron Age in the discovery of Lindow Man.

Bannock varieties can be named or differentiated according to various characteristics: the flour or meal from which they are made, whether they are leavened or not, whether they have certain special ingredients, how they are baked or cooked, and the names of rituals or festivals in which they are used. Historically, specially made bannocks were used in rituals marking the changing of the Gaelic seasons: St Bride's bannock for spring (February 1), Bealtaine bannock for summer (May 1), Lughnasadh or Lammas bannock for autumn harvests (August 1), and Samhain bannock for winter (end of October). Other special bannocks include beremeal bannock, bride's bannock, cod liver bannock, cryin' bannock, fallaid bannock, fife bannock, Hogmanay bannock, Marymas bannock, mashlum bannock, Michaelmas bannock, pease bannock, Pitcaithly bannock, salt bannock, sautie bannock, Silverweed bannock, St Columba's bannock, teething bannock, Yetholm bannock, and Yule bannock. Manx bonnag probably comes from the same root form as bannock and is made using similar ingredients. In the north of England, bannocks are often made using pastry rather than a bread dough.

Selkirk bannock from Scotland is well-known and named after the town in the Scottish borders where it is traditionally made. It is a spongy, buttery variety, sometimes compared to a fruitcake, made from wheat flour and containing a very large quantity of raisins. The first known maker of this variety was a baker named Robbie Douglas, who opened his shop in Selkirk in 1859. When Queen Victoria visited Sir Walter Scott's granddaughter at Abbotsford she is reputed to have taken her tea with a slice of Selkirk bannock, thus ensuring that its reputation was enshrined forever. Today, Selkirk bannocks are popular throughout Great Britain, and can be found at most large supermarkets.

Bannock, skaan (or scone), or Indian bread is found throughout North American Native cuisine, including that of the Inuit of Canada and Alaska, other Alaska Natives, the First Nations of the rest of Canada, the Native Americans in the United States, and the Métis.

A type of bannock, using available resources, such as flour made from maize, roots, tree sap and leavening agents, may have been produced by indigenous North Americans prior to contact with outsiders, similar to modern cornbread. Some sources claim that bannock was unknown in North America until the 1860s when it was created by the Navajo who were incarcerated at Fort Sumner, while others indicate that it came from a Scottish source. Native American tribes who ate camas include the Nez Perce, Cree, Coast Salish, Lummi, and Blackfoot tribes, among many others. Camas bulbs contributed to the survival of members of the expedition of Lewis and Clark (1804–06). Camas bulbs (and bannock made from them) are listed in the Ark of Taste. 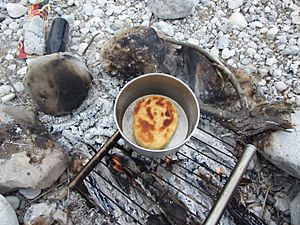 Other languages do offer hints of European influence, however, for example Navajo: bááh dah díníilghaazhh "bread that bubbles" (i.e. in fat), where "bááh" is a borrowing from Spanish: pan for flour and yeast bread, as opposed to the older Navajo: łeesʼáán which refers to maize bread cooked in hot ashes Likewise, Yup'ik alatiq comes from Russian: ола́дьи "pancakes, fritters".

Bannock is generally prepared with white or whole wheat flour, baking powder, sugar, lard and water or milk, which are combined and kneaded (possibly with spices, dried fruits or other flavouring agents added) then fried in rendered fat, vegetable oil, or shortening, baked in an oven or cooked on a stick.

Bannock is the most universal of dishes in the indigenous Canadian repertoire, and is used equally in the Arctic, Plains, Sub-arctic, and Pacific cultural areas. However, the modern recipes for bannock are clearly influenced by the government rations that were distributed on Indian reserves in the late 19th century when access to country foods (plants and animals native to the region) were restricted by the arrival of non-indigenous settlers. Such rations included the staples of the European Canadian diet at that time: wheat flour, sugar, lard, and butter; all high-calorie, low-nutrient, shelf-stable foods produced in bulk quantities and shipped long distances (together with the preservative and flavour additive, salt). These new ingredients helped indigenous people to survive the loss of access to country foods, and are now thought of by some as fully a part of indigenous identity, and even as "Indian soul food". However, for others they are a reminder of the negative impacts of colonialism, and are regarded as an imposition.

The history and political significance of bannock has changed over the years on Turtle Island. Bannock has had and continues to hold great significance to Native American peoples, from pre-contact to the present.

The bannock of many pre-contact American peoples was made of corn and nut meal, and flour made from various roots and ground plant bulbs, and sweetened with syrup from trees. There were many regional variations of bannock that included different types of flour, and the addition of dried or fresh fruit. The method of cooking was similarly diverse. Some rolled the dough in sand then pit-cooked it. When completed, the sand was brushed off and then the bread was consumed. Other groups baked the bannock in clay or rock ovens. while some wrapped the dough around a green, hardwood stick and toasted it over an open fire. Bannock's functionality made it viable to cook and consume while conducting daily activities at home, or hunting, trapping, fishing, and gathering out on the land.

Colonization dramatically changed the traditional ways of Indigenous Americans, including the relationship they had with bannock. Whereas bannock was once a food of function for travel and work, it became a necessary staple for Indigenous people to feed their families and stave off starvation when they were forced to give up much of their traditional food sources through the reservation system. On these reserves, traditional methods of hunting, gathering, and farming was replaced by government food rations, usually consisting of flour and lard.As a result of this policy, indigenous knowledge of edible plants and other natural foodstuff was lost, while wheat and flour entered into Indigenous bannock recipes, drastically altering their nature.

Bannock and similar non-Indigenous and processed foods contribute to high rates of diseases such as diabetes, hypertension and obesity among Indigenous people.

All content from Kiddle encyclopedia articles (including the article images and facts) can be freely used under Attribution-ShareAlike license, unless stated otherwise. Cite this article:
Bannock (food) Facts for Kids. Kiddle Encyclopedia.