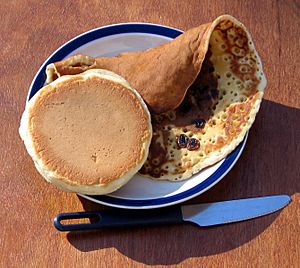 A pancake and a crumpet in one dish.

A crumpet is a kind of flat, small round bread that is raised by yeast. They are about the same size as an English muffin. They are made in crumpet rings that are four inches wide and usually one inch deep. Crumpets are usually baked on a griddle and served toasted. A well-baked crumpet has a brown bottom and a spongey top that has many tiny holes. Crumpets are toasted whole, while English muffins are split and then toasted. After the baking, crumpets are spread with butter or cream and jam.

The first recipe for crumpets was long ago, referred to frequently as the "crompid cake" by many. The Oxford English Dictionary traced the history back to 1382.

Crumpet...[Not known till in the 17th century], Wyclif has however used 'crompid cake'...which may be the antecedent of the name. "A cake of a loaf, a crusted cake spreynde with oyle, a crompid cake..."

The Oxford Companion to Food also says that the earliest published recipe for crumpets was by Elizabeth Raffald, in 1769. There, the "crompid cake" is mentioned as well with buckwheat griddle cakes so it is believed that there is a connection between crumpets and the buckwheat pancake.

Elizabeth Raffald mentions it in her book of The Experienced English Housekeeper. Her recipe is very similar to the modern crumpet recipe, especially in the baking, buttering, and serving.

All content from Kiddle encyclopedia articles (including the article images and facts) can be freely used under Attribution-ShareAlike license, unless stated otherwise. Cite this article:
Crumpet Facts for Kids. Kiddle Encyclopedia.