Tablet (taiblet in Scots) is a medium-hard, sugary confection from Scotland. Tablet is usually made from sugar, condensed milk, and butter, which is boiled to a soft-ball stage and allowed to crystallise. It is often flavoured with vanilla or whisky, and sometimes has nut pieces in it.

Tablet differs from fudge in that it has a brittle, grainy texture, where fudge is much softer. Well-made tablet is a medium-hard confection, not as soft as fudge, but not as hard as hard candy.

Commercially available tablet often uses fondant instead of the milk products. This produces a slightly less granular texture compared to the traditional home-made tablet, and is supposedly easier to prepare on a commercial scale.

According to The Scots Kitchen p.304 by F. Marian McNeill, tablet is first noted in The Household Book of Lady Grisell Baillie in the early 18th century. The traditional recipe uses just sugar and cream. More modern recipes substitute condensed milk and butter for the cream, as it has a tendency to burn when boiled.

Tablet is sometimes referred to as Swiss Milk tablet (Swiss Milk being a term used by some for condensed milk) or butter tablet. 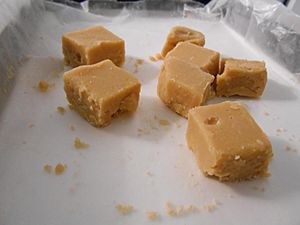 Tablet is almost identical to Québécois sucre à la crème. It is also reportedly similar to South American tableta de leche. Another close relative can be found in the Netherlands called borstplaat, eaten during the time that Sinterklaas is celebrated.

All content from Kiddle encyclopedia articles (including the article images and facts) can be freely used under Attribution-ShareAlike license, unless stated otherwise. Cite this article:
Tablet (confectionery) Facts for Kids. Kiddle Encyclopedia.