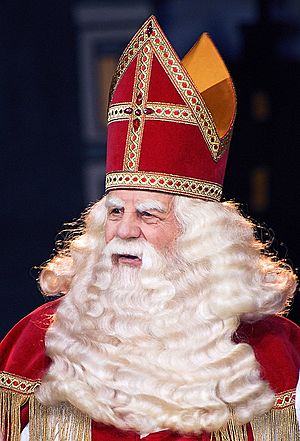 Sinterklaas (also called Sint Nicolaas) is a traditional Winter holiday figure in Dutch-speaking Europe (The Netherlands and Flanders), and is also well known in the former Dutch colonies. Every year he is celebrated in The Netherlands, one day before Saint Nicholas died (5 December) and on (6 December) in Belgium. His helper and best friend is Black Peter. Sinterklaas is the basis of the mythical holiday figure of Santa Claus in the United States. Sinterklaas has nothing to do with Christmas. Christmas will also be celebrated in the Netherlands as well as in Belgium, so Santa Claus is not the same as Sinterklaas (in the Netherlands). Sinterklaas arrives from Spain in a boat and has a white horse that can walk across rooftops. Every little kid puts his shoe at the chimney (or the window) and sings a song, when the kid goes to sleep sinterklaas comes and puts a present in the shoe. .

All content from Kiddle encyclopedia articles (including the article images and facts) can be freely used under Attribution-ShareAlike license, unless stated otherwise. Cite this article:
Sinterklaas Facts for Kids. Kiddle Encyclopedia.