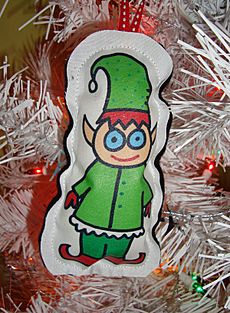 An elf appears on a Christmas ornament

A Christmas elf is a diminutive elf that lives with Santa Claus at the North Pole and serves as his helper. Christmas elves are often said to wear green or red clad with large, pointy ears and pointy hats. Santa's elves are known to make the toys in Santa's workshop and take care of his reindeer, among other tasks.

The Christmas elf appeared in literature as early as 1850 when Louisa May Alcott completed, but never published a book entitled Christmas Elves. The image of the elves in the workshop was popularized by Godey's Lady's Book, with a front cover illustration for its 1873 Christmas Issue showing Santa surrounded by toys and elves with the caption, "Here we have an idea of the preparations that are made to supply the young folks with toys at Christmas time." During this time, Godey's was immensely influential to the birth of Christmas traditions, having shown the first widely circulated picture of a modern Christmas tree on the front cover of its 1850 Christmas issue. Additional recognition was given in Austin Thompson's 1876 work "The House of Santa Claus, a Christmas Fairy Show for Sunday Schools".

The elves are generally said to live for hundreds, or even thousands, of years, despite the fact that in some cases they appear eternally youthful as children.

All content from Kiddle encyclopedia articles (including the article images and facts) can be freely used under Attribution-ShareAlike license, unless stated otherwise. Cite this article:
Christmas elf Facts for Kids. Kiddle Encyclopedia.