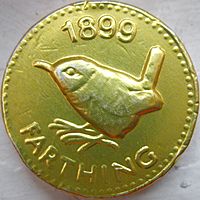 A wrapped chocolate coin in the form of a British farthing 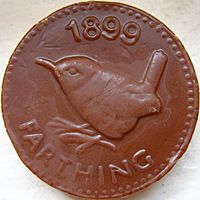 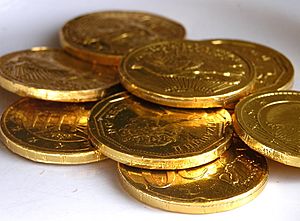 Chocolate coins, or chocolate money, are foil-covered chocolates in the shape of coins.

As a Christmas tradition, the chocolate coin giving is said to be inspired by the deeds of Saint Nicholas in the fourth century, with chocolate coins introduced some time after chocolate's introduction into Europe in the sixteenth century.

In the United Kingdom chocolate coins mimic the design of real money; they are traditionally bought around Christmas and are used to decorate the Christmas tree and to fill the stockings of children. When children visit a friend or relative they are allowed to find and take chocolates from the tree as a treat. A variant of this is that chocolate coins are hidden somewhere in the house for children to find, often in the form of a treasure trail.

All content from Kiddle encyclopedia articles (including the article images and facts) can be freely used under Attribution-ShareAlike license, unless stated otherwise. Cite this article:
Chocolate coin Facts for Kids. Kiddle Encyclopedia.