Jan Havickszoon Steen (c. 1626 – buried 3 February 1679) was a Dutch genre painter of the 17th century (also known as the Dutch Golden Age). His works are known for their insight, sense of humour and abundance of colour. He is mostly known for his genre paintings today. 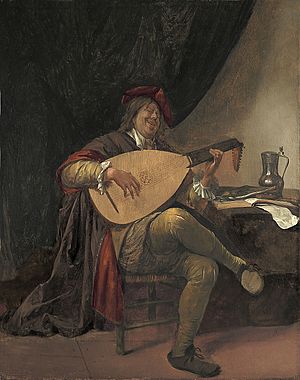 Daily life was Jan Steen's main theme. Many of the genre scenes he portrayed, are lively, even so much that "a Jan Steen household", meaning a messy scene, became a Dutch proverb (een huishouden van Jan Steen). Subtle hints in his paintings seem to suggest that Steen meant to warn the viewer rather than invite him to copy this behaviour. Many of Steen's paintings bear references to old Dutch proverbs or literature. He often used members of his family as models, and painted quite a few self-portraits.

Steen did not shy from other themes: he painted historical, mythological and religious scenes, portraits, still lifes and natural scenes. His portraits of children are famous. He is also well known for his mastery of light and attention to detail, most notably in Persian rugs and other textiles.

Steen produced about 800 paintings, of which roughly 350 survive. His work was valued very much by his peers and as a result he was reasonably well paid for his paintings. His his work proved a source of inspiration for many painters.

All content from Kiddle encyclopedia articles (including the article images and facts) can be freely used under Attribution-ShareAlike license, unless stated otherwise. Cite this article:
Jan Steen Facts for Kids. Kiddle Encyclopedia.