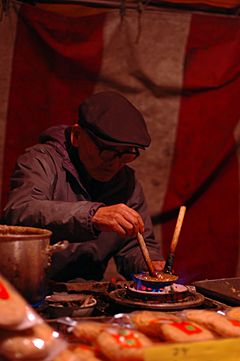 Honeycomb toffee, sponge toffee, cinder toffee or hokey pokey is a sugary toffee with a light, rigid, sponge-like texture. Its main ingredients are typically brown sugar, corn syrup (or molasses or golden syrup in the Commonwealth of Nations) and baking soda, sometimes with an acid such as vinegar. The baking soda and acid react to form carbon dioxide which is trapped in the highly viscous mixture. When acid is not used, thermal decomposition of the baking soda releases carbon dioxide. The sponge-like structure is formed while the sugar is liquid, then the toffee sets hard. The candy goes by a variety of names and regional variants.

Owing to its relatively simple recipe and quick preparation time, in some regions it is often made at home, and is a popular recipe for children. It is also made commercially and sold in small blocks, or covered in chocolate, a popular example being the Crunchie bar.

Honeycomb toffee is known by a wide variety of names including:

In China, it is called honeycomb sugar (蜂窩糖;fēngwōtáng). It is said to be a popular type of confectionery among the post-80s in their childhood.

In Hungary, it is known as törökméz (Turkish honey) and is commonly sold at town fairs.

The same confection is a traditional sweet in Japan known as karumeyaki (カルメ焼きcode: ja is deprecated ), a portmanteau of the Portuguese word caramelo (caramel) and the Japanese word yaki (to bake), and thus can be roughly translated into English as 'baked caramel' or 'grilled caramel'. It is typically hand-made, and often sold by street vendors.

Dalgona (Hangul: 달고나) or ppopgi (Hangul: 뽑기) is a Korean candy made with melted sugar and baking soda. It was a popular street snack in the 1970s and 1980s, and is still eaten as a retro food. It has a different name for each region. When a pinch of baking soda is mixed into melted sugar, the thermal decomposition of the baking soda releases carbon dioxide, which makes the liquidized sugar puff up, and it becomes a light and crunchy candy once cooled and hardened. Typically, the creamy beige liquid is poured on a flat surface, pressed flat, and stamped with a patterned mold. Eaters try to trim their way around the outline or picture on the snack without breaking the picture. If the trimming is completed successfully without breaking the candy, the consumer receives another free dalgona. Modern cafes in Seoul now serve novel beverages where dalgona is heaped on top of iced tea or coffee, and pastries such as scones. Some cafes also used dalgona to launch desserts such as bingsu (ice dessert) and souffle. Also, In addition, as the stay-at-home culture spread to Covid-19, "Making Dalgona at Home" was popular on various channels on SNS. In fact, the New York Times and the BBC have been making headlines by introducing how to manufacture "K-Dalgona."

All content from Kiddle encyclopedia articles (including the article images and facts) can be freely used under Attribution-ShareAlike license, unless stated otherwise. Cite this article:
Honeycomb toffee Facts for Kids. Kiddle Encyclopedia.