Crunchie is a brand of chocolate bar with a honeycomb toffee (or known as "sponge toffee" in Canada and "honeycomb" or "cinder toffee" in the UK) sugar centre. It is made by Cadbury and was originally launched in the UK by J. S. Fry & Sons in 1929.

A Crunchie split in half 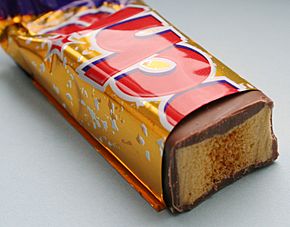 A close-up of the bar's honeycomb centre.

In the late 1990s there was a range of limited edition Crunchies on sale in the UK. These included a lemonade bar and a Tango Orange bar, in which the chocolate contained the different flavourings. A champagne-flavoured bar was launched for New Year's Eve 1999. In South Africa, Cadbury sold a white chocolate version in a blue wrapper until recently.

Like other chocolate brands, Crunchie brand ice cream bars and cheesecake are also sold in some countries. Such products contain nuggets of the honeycomb.

In 2006, a "Crunchie Blast" variety of the product was launched, which featured "popping candy" inside the bar. It was soon discontinued; but an ice cream of the same name, which is Magnum (ice cream)-shaped honeycomb ice cream with popping candy covered in milk chocolate, is sold in the UK and Ireland.

In 2010, Cadbury's launched Crunchie Rocks, a mixture of chocolate, cornflakes and Crunchie.

Until September 2010, Crunchie was produced in the Somerdale, Keynsham plant in Somerset, UK; however, production has now transferred to Cadbury's new plant in Skarbimierz, Poland. Labels for these products do not state a country of origin, instead stating "Made in the EU under licence from Cadbury UK Ltd".

Violet Crumble is a very similar product that was invented in Australia in 1913. It continues to be produced there, with some small niche exports to other nations.

The Crunchie bar is widely available in the United Kingdom, Ireland, Canada, Australia, New Zealand, South Africa, and India. It is imported in other countries, including Cyprus, Hong Kong, Malta, Nigeria, Panama, Lebanon, Saudi Arabia, Malaysia, the Philippines, Portugal, Singapore, Sri Lanka, Nepal, Tahiti and less widely so in the United States (more widely in New York City than anywhere else across the continental U.S.). A similar product, with or without a chocolate coating, is sold as sponge candy in the United States, although honeycomb in these forms are also available outside the USA.

Crunchie Tango and other limited editions

In 2000, a short-lived (but successful) sister chocolate bar was launched, called Crunchie Tango. It was co-produced by Cadbury and Britvic and featured Tango Orange flavouring. Other limited edition flavours included Lemonade, Champagne and Mint. In the 1960s a Crunchie Peppermint was also available. An "Endless Crunchie" was released in 2013 for Christmas and contained 40 Crunchie bars.

In Australia and New Zealand, Crunchie bars are widely known for having New Zealand's longest-running television advertisement, the "Crunchie Train Robbery" which won many awards and ran in unchanged form for over 20 years from the late 1970s.

In both Ireland and the United Kingdom, the Crunchie has been advertised since the 1980s with the slogan "Get that Friday feeling". Prior to the 1980s Crunchie was advertised as "Crunchie makes exciting biting". In 1991, Cadbury launched an TV ad campaign that made use of The Pointer Sisters song, "I'm So Excited", which became one of the longest running advert campaigns in television history, continuing to be used up until 2008.

All content from Kiddle encyclopedia articles (including the article images and facts) can be freely used under Attribution-ShareAlike license, unless stated otherwise. Cite this article:
Crunchie Facts for Kids. Kiddle Encyclopedia.