A Twix chocolate bar, broken in half

A chocolate bar is a chocolate confection in an oblong or rectangular form, which distinguishes it from bulk chocolate produced for commercial use or individually portioned chocolates such as pastilles, bon-bons, and truffles. In most of the English-speaking world, chocolate bar also refers to a typically snack-sized bar coated with or substantially consisting of chocolate but containing other ingredients.

A chocolate bar made exclusively from chocolate contains some or all of the following components: cocoa solids, cocoa butter, sugar, and milk. The relative presence or absence of these define the subclasses of chocolate bar made of dark chocolate, milk chocolate, and white chocolate. In addition to these main ingredients a chocolate bar may contain flavorings such as vanilla and emulsifiers such as soy lecithin to alter its consistency. While vanilla is the most common flavouring, many other flavours are available, including mint, orange, and coffee.

Chocolate bars containing other ingredients feature a wide variety of layerings or mixtures that include nuts, fruit, caramel, nougat, and fondant. A popular example is a Snickers bar, which consists of a nougat mixed with caramel and peanuts. Chocolate bars are often loosely called candy bars in American English (but not in Canada), a term that encompasses similar treats produced without chocolate, such as the Zagnut and Bit-o-Honey bars. A wide selection of similar chocolate treats are produced with added sources of protein and vitamins. These include energy bars, protein bars and granola bars sold as snacks and/or nutritional supplements. 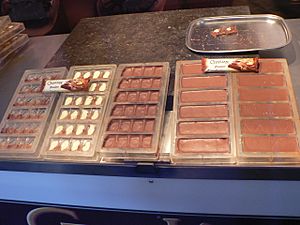 The steps in making a praline chocolate bar

Up to and including the 19th century, confectionery of all sorts was typically sold in small pieces to be bagged and bought by weight. The introduction of chocolate as something that could be eaten as is, rather than used to make beverages or desserts, resulted in the earliest bar forms, or tablets. At some point, chocolates came to mean any chocolate-covered sweets, whether nuts, creams (fondant), caramel candies, or others. The chocolate bar evolved from all of these in the late-19th century as a way of packaging and selling candy more conveniently for both buyer and seller; however, the buyer had to pay for the packaging. It was considerably cheaper to buy candy loose, or in bulk.

Chocolate comes from the cacao tree. Cocoa pods grow on these trees. They get about as big as a melon. Once they are ripe, they turn from green to orange. Then workers can split them open and take out cocoa beans. Factories use machines to break down the cocoa beans into cocoa butter and chocolate. Then they add sugar and milk to make the chocolate taste better.

All content from Kiddle encyclopedia articles (including the article images and facts) can be freely used under Attribution-ShareAlike license, unless stated otherwise. Cite this article:
Chocolate bar Facts for Kids. Kiddle Encyclopedia.