Cadbury Dairy Milk is a brand of milk chocolate manufactured by Cadbury. It was introduced in the United Kingdom in 1905 and now consists of a number of products. Every product in the Dairy Milk line is made with exclusively milk chocolate. In 2014, Dairy Milk was ranked the best-selling chocolate bar in the UK. It is manufactured and distributed by the Hershey Company in the United States under licence from Cadbury. The chocolate is now available in many countries including India, Kazakhstan, China, Sri Lanka and Pakistan. 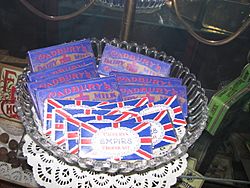 Cadbury chocolate bars (Dairy Milk back of tray), circa 1910

In June 1905, in Birmingham, England, George Cadbury Junior made Cadbury's first Dairy Milk bar, with a higher proportion of milk than previous chocolate bars; by 1914, it would become the company's best-selling product. Through its development, the bar was variously called Highland Milk, Jersy Maid and Dairy Maid. Accounts on the origin of the Dairy Milk name differ; it has been suggested that the name change came about on the advice of a shopkeeper in Plymouth, but Cadbury maintains that a customer's daughter came up with the name. Fruit and Nut was introduced as part of the Dairy Milk line in 1926, soon followed by Whole Nut in 1930. By this point, Cadbury's was the brand leader in the United Kingdom. In 1928, Cadbury's introduced the "glass and a half" slogan to accompany the Dairy Milk bar, to advertise the bar's higher milk content.

In September 2012, Cadbury made the decision to change the shape of the bar chunks to a more circular shape in order to reduce the weight. The bar had not seen such a significant change in shape since 1905.

Since 2007, Cadbury, has had a trademark in the United Kingdom for the distinctive purple colour (Pantone 2865C) of its chocolate bar wrappers, originally introduced in 1914 as a tribute to Queen Victoria. In October 2013, however, an appeal by Nestlé succeeded in overturning that court ruling.

In July 2018, Cadbury announced it would launch a new Dairy Milk version with 30% less sugar. The chief nutritionist of Public Health England, Alison Tedstone, said she was "pleased that Mondelez is the latest … name" to offer "healthier" products. 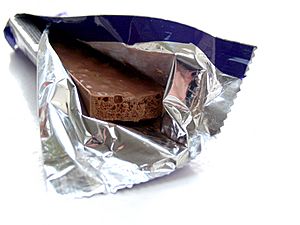 The original Dairy Milk bar ("with a glass and a half of fresh milk") was launched in 1905.

Variant bars include Caramel, "Fruit & Nut" (a bar with raisins and almonds), "Whole Nut" (with hazelnuts), "Dairy Milk Silk" and a bar with a Turkish delight centre. Dairy Milk Ritz, a bar with salty Ritz crackers was launched in the United Kingdom in 2014. Alongside this new bar, Dairy Milk with LU biscuits was also launched.

A Vegemite flavoured bar, which consists of milk chocolate, caramel, and Vegemite (5%), was launched in Australia in 2015.

In 1986 the glass and a half symbol appeared on the front of the Irish Dairy Milk wrapper.

Ingredients and tastes for local markets

According to a 2007 report in The New York Times, a British bar contained (in order) milk, sugar, cocoa mass, cocoa butter, vegetable fat and emulsifiers, whilst the American version manufactured by Hershey started its list of ingredients with sugar. It also listed lactose, emulsifier soy lecithin, and "natural and artificial flavorings". Cadbury supplied its chocolate crumb to Hershey, which then added cocoa butter during processing. According to its spokesman, Cadbury tries to adapt the taste of the product to that which local consumers are accustomed, meaning more akin to a Hershey bar for the US market.

There is a variation of taste between the UK Cadbury-produced products and the equivalents produced by Irish Cadbury; the same can be said for locally produced Cadbury products elsewhere in the world.

In Ireland Cadbury Dairy Milk used the jingle "The Perfect Word For Chocolate" (1986-1988) between (1989-1996) the popular jingle "The Choice Is Yours The Taste Is Cadbury" with the "Mysteries of Love" was a popular advert through them years. The song Show Me Heaven used in 1996 advert with the jingle "Tastes Like Heaven". 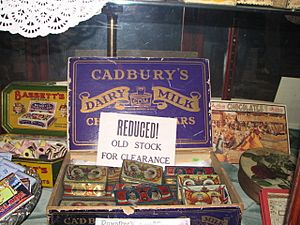 A museum display of tins of Cadbury's Dairy Milk chocolate

Cadbury has always tried to keep a strong association with milk, with slogans such as "a glass and a half of full cream milk in every half pound" and advertisements that feature a glass of milk pouring out and forming the bar.

In 2004, Cadbury started a series of television advertisements in the United Kingdom and Ireland featuring a human and an animal (representing the human's happiness) debating whether to eat one of a range of included bars.

In 2007, Cadbury launched a new advertising campaign entitled Gorilla, from a new in-house production company called "Glass And A Half Full Productions". The advert was premièred during the season finale of Big Brother 2007, and consists of a gorilla at a drum kit, drumming along to the Phil Collins song "In the Air Tonight". The advert has over twenty million views on YouTube, and put the Phil Collins song back into the UK charts.

On 28 March 2008, the second Dairy Milk advert produced by Glass and a Half Full Productions aired. The ad, entitled 'Trucks' features several trucks at night on an empty runway at an airport racing to the tune of Queen's "Don't Stop Me Now". The ad campaign ran at the same time as the problems at Heathrow Terminal 5 with baggage handling; in the advert baggage was scattered across the runway.

On 5 September 2008, the Gorilla advert was relaunched with a new soundtrack – Bonnie Tyler's "Total Eclipse of the Heart" – a reference to online mash-ups of the commercial. Similarly, a version of the truck advert appeared, using Bon Jovi's song "Livin' on a Prayer". Both remakes premiered once again during the finale of Big Brother 2008.

In January 2009, 'Eyebrows', the third advert in the series, was released, of two children moving their eyebrows up and down rapidly to a set electro-funk beat: "Don't Stop the Rock" featuring Leah McArdle and Bradley Ford. Freestyle.

In April 2010, a fourth advert aired, entitled 'Chocolate Charmer', containing a scientist mixing milk and chocolate to make a dairy milk bar to the tune of "The Only One I Know" by The Charlatans. This was different from the others in that it did not feature the 'A Glass and a Half Full Production' title card at the start.

In April 2011, a fifth advert aired, known as 'Charity Shop' or 'Dancing Clothes', featuring dancing clothes at a charity shop to the tune of "We Don't Have to Take Our Clothes Off" by Jermaine Stewart. This exposed the song to a new generation who downloaded the track and returned the song to the UK Top 40 so far reaching no. 29. This advert marked the return of the Glass and a Half Full title card.

Glass and a Half Full Records

A new 'record label' was launched as part of the Glass and a Half Full Productions campaign. The first song released was Zingolo featuring Tinny, to promote Fairtrade Dairy Milk. A full music video was made incorporating the 60-second ads, as well as a Facebook page.

The 2012 campaign focuses on an 'organisation made to bring joy to people'. Chocolate fountains were put in shopping centres such as Westfield London and the first ad focused on the relaunch of Dairy Milk Bubbly. During the campaign in 2012, Cadbury Dairy Milk was launched in new flavours such as Toffee Popcorn, Golden Biscuit Crunch (an exclusive to Sainsbury's), Nutty Caramel and also Cadbury Dairy Milk with Oreo. Along with the new flavours, Cadbury also launched two new Bubbly bars including a mini version and a Mint Bubbly. Cadbury has also launched Crispello and, most recently, launched "Marvellous Creations" in the UK.

In addition, Cadbury also brought the Joyville concept into Asia where Singapore Bloggers were invited to join in and spread the love.

In 2014, Joyville was replaced with the "Free The Joy" campaign. The song in a television advert is "Yes Sir, I Can Boogie" by Baccara. A new design was launched for Dairy Milk (and its variants) inviting consumers to scan an on-pack QR code and visit a website featuring "Free The Joy" moments. 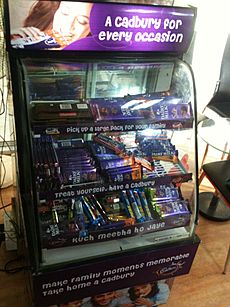 Cadburys Chocolate in refrigerated display at a store in Coimbatore, India

Cadbury has enjoyed a substantial fan base in India. The Dairy Milk primarily is a huge success. Initially, the company had appointed Amitabh Bachchan as the brand ambassador in 2004. However the brand soon faced a significant backlash with worms being spotted in a few of the chocolate bars. With its new campaigns however the company recovered again with increased sales. Cadbury is known for its marketing campaigns in India that have known to instill a sense of playfulness and innocence with its campaigns. One campaign that promoted the product by using the country's love for cricket was very successful. The advert is noted to be the best advertisement made in India by The Times of India.

Another famous campaign hosted by the company in the past was the 'Shubh Aarambh' Campaign. This campaign made use of the traditional practice of Indian households of having something sweet before every auspicious occasion. It is a traditional belief that this leads to a favourable outcome for the people. This campaign was successful and positioned Cadbury Dairy Milk chocolates as part of a family name. Cadbury today holds 70% of the market share of the chocolate industry in the country.

In 2015, Hershey's blocked imports of overseas-made Cadbury chocolate and other confectionery to the US that infringed on its trademark licensing in a settlement with a grey importer. British Dairy Milk has been blind taste-tested as providing a creamier taste and texture, with the Hershey's-made chocolate reportedly leaving a less pleasing coating on the tongue and a somewhat stale aftertaste.

Cadbury was fined GB£1 million in July 2007 due to its products having been found to have been at risk of infection with salmonella (at a factory in Marlbrook, Herefordshire, England). It spent a further £30 million decontaminating the factory.

On 14 September 2007, Cadbury Schweppes investigated a manufacturing error over allergy warnings, recalling for the second time in two years thousands of chocolate bars. A printing mistake at the Keynsham factory resulted in the omission of nut allergy labels from 250g Dairy Milk Double Chocolate bars.

The 2008 Chinese milk scandal affected Cadbury, when much of the Cadbury Dairy Milk manufactured in mainland China was tainted with melamine. Although it can be safely used in plastic manufacturing, melamine is toxic, particularly to infants.

In 2003 worms were found in the chocolate bars in India. Widespread outrage brought by the state media halted production for a few days. Amitabh Bachchan, who was then the Brand ambassador, was also not spared.

All content from Kiddle encyclopedia articles (including the article images and facts) can be freely used under Attribution-ShareAlike license, unless stated otherwise. Cite this article:
Cadbury Dairy Milk Facts for Kids. Kiddle Encyclopedia.