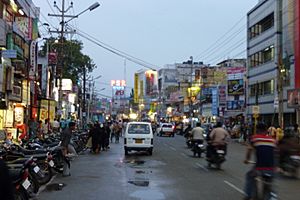 Coimbatore (Tamil: கோயம்புத்தூர்), also known as Kovai (Tamil: கோவை), is the second largest city in the Tamil Nadu, after Chennai. It is the administrative headquarters of the Coimbatore District and a major textile and engineering hub of South India. It forms a part of the ancient Kongu Nadu region of South India, where its people were the first to establish a territorial state. Coimbatore city, including its suburban areas has a population of 2.4 million people.

It is referred as the Manchester of South India in business circles, and has textile mills, engineering firms, automobile parts manufacturers, health care facilities and educational institutions. The hill stations of Ooty, Coonoor and Valparai are close to the city, making it a good tourist attraction throughout the year. The city is on the banks of the Noyyal River and is close to the Siruvani Waterfalls.This city is a textile based one.

Avinashi is a nearby town where a famous Shiva Temple is located.

All content from Kiddle encyclopedia articles (including the article images and facts) can be freely used under Attribution-ShareAlike license, unless stated otherwise. Cite this article:
Coimbatore Facts for Kids. Kiddle Encyclopedia.