The spot-billed pelican (Pelecanus philippensis) is a member of the pelican family. It breeds in southern Asia from southern Pakistan. It is a bird of large inland and coastal waters, especially shallow lakes. The nest is a heap of vegetation in a tree. Three to four eggs is the usual clutch size. 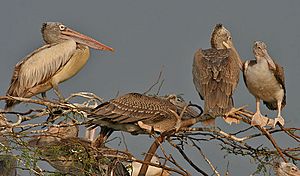 Adult and immatures at nest

The spot-billed pelican is a relatively small pelican but still a large bird. It is 125–152 cm (49–60 in) long and a weight of 4.1–6 kg (9.0–13.2 lb). It is mainly white, with a grey crest, hindneck and a brownish tail. The feathers on the hind neck are curly and form a greyish nape crest. The pouch is pink to purplish and has large pale spots, and is also spotted on the sides of the upper mandible. The tip of the bill (or nail) is yellow to orange. In breeding plumage, the skin at the base of the beak is dark and the orbital patch is pink. In flight they look not unlike the Dalmatian pelican but the tertials and inner secondaries are darker and a pale band runs along the greater coverts. The tail is rounder.

The newly hatched young are covered in white down. They then moult into a greyish speckled plumage. The spots on the bill appear only after a year. The full adult breeding plumage appears in their third year. 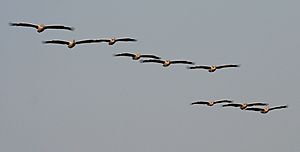 The species is found to breed only in peninsular India, Sri Lanka and in Cambodia. A few birds from India are known to winter in the Gangetic plains but reports of its presence in many other parts of the region such as the Maldives, Pakistan and Bangladesh has been questioned. The main habitat is in shallow lowland freshwaters. The spot-billed pelican is not migratory but are known to make local movements and are more widely distributed in the non-breeding season. 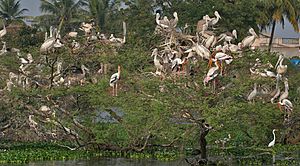 Nesting along with painted storks

This species is a colonial breeder, often breeding in the company of other waterbirds. The nests are on low trees near wetlands and sometimes near human habitations. Many large breeding colonies have been recorded and several have disappeared over time. In June 1906, C E Rhenius visited a colony in Kundakulam in Tirunelveli district where the villages considered the birds semi-sacred. The same colony was revisited in 1944, and was found to have about 10 nests of pelicans and nearly 200 nests of painted stork.

The Sittang River in Burma was said by E W Oates to have "millions" of pelicans in 1877 and in 1929 E C Stuart Baker reported that they were still nesting in thousands along with greater adjutant storks:

The whole forest consisted of very large trees, but a portion, about one in twenty, was made up of wood-oil trees, gigantic fellows, 150 feet high and more, and with a smooth branchless trunk of 80 to 100 feet. These are the trees selected by the pelicans.
I was out that day till 3 p.m., continually moving, and must have walked at least twenty miles in various directions, but never from first to last was 1 out of sight of either a Pelican's or Adjutant's nest. From what I saw, and from what the Burmans told me, I compute the breeding-place of these birds to extend over an area about twenty miles long and five broad.

This colony was however reported by B E Smythies to have disappeared between the 1930s and the 1940s. 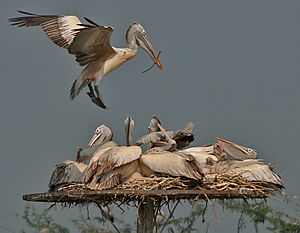 Nesting on an artificial platform at Uppalapadu, Andhra Pradesh

Due to habitat loss and human disturbance, the spot-billed pelican's numbers have declined and many populations in Southeast Asia are now extinct. The specific name refers to the Philippines, where the species was abundant in the early 1900s but declined and become locally extinct in the 1960s. The populations in southern India are thought to be on the rise. Estimates suggest that increased protection has since enabled a recovery in their numbers and the status of the species was changed from vulnerable to near threatened in the 2007 IUCN Red List.

All content from Kiddle encyclopedia articles (including the article images and facts) can be freely used under Attribution-ShareAlike license, unless stated otherwise. Cite this article:
Spot-billed pelican Facts for Kids. Kiddle Encyclopedia.