Esslingen am Neckar facts for kids 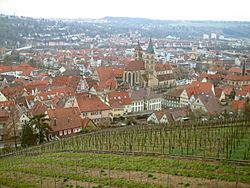 Esslingen am Neckar is a city in southern Germany, in the state of Baden-Württemberg. It is on the river Neckar, about 14 kilometres (9 miles) southeast of Stuttgart city center.

Esslingen was a free imperial city for several centuries until it was annexed by Württemberg in 1802.

All content from Kiddle encyclopedia articles (including the article images and facts) can be freely used under Attribution-ShareAlike license, unless stated otherwise. Cite this article:
Esslingen am Neckar Facts for Kids. Kiddle Encyclopedia.