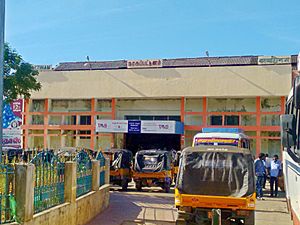 Nagapattinam is a town and headquarters of Nagapattinam District in Tamil Nadu state of India. One of the town which was severely hit by the 2004 tsunami.

As Nagapattinam is nearby the sea, the main occupation of the people here is Fishing.

All content from Kiddle encyclopedia articles (including the article images and facts) can be freely used under Attribution-ShareAlike license, unless stated otherwise. Cite this article:
Nagappattinam Facts for Kids. Kiddle Encyclopedia.