Kaveri, also referred as Ponni, is an Indian river flowing through the states of Karnataka and Tamil Nadu. It is the third largest after Godavari and Krishna in south India and the largest in Tamil Nadu which on its course, bisects the state into North and South.

Originating in the foothills of Western Ghats at Talakaveri, Kodagu in Karnataka it flows generally south and east through Karnataka and Tamil Nadu and across the southern Deccan plateau through the southeastern lowlands, emptying into the Bay of Bengal through two principal mouths in Poompuhar, Tamil Nadu. Amongst the river valleys, the Kaveri delta forms one of the most fertile regions in the country. 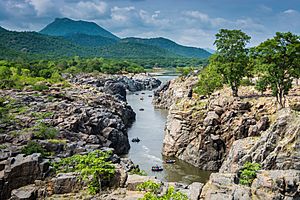 In Mandya district it forms the island of Shivanasamudra, on either side of which are the scenic Shivanasamudra Falls that descend about 100 metres (330 ft). The river is the source for an extensive irrigation system and for hydroelectric power. The river has supported irrigated agriculture for centuries and served as the lifeblood of the ancient kingdoms and modern cities of South India. Access to the river's waters has pitted Indian states against each other for decades. 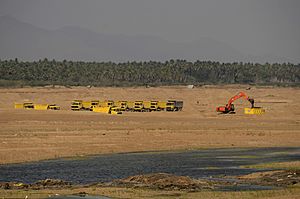 The primary uses of Kaveri is providing water for irrigation, water for household consumption and the generation of electricity.

An estimate at the time of the first Five Year Plan puts the total flow of the Kaveri at 15 cubic kilometres (12,000,000 acre⋅ft), of which 60 percent was used for irrigation. The Torekadanahalli pumpstation sends 540 million litres (19,000,000 cu ft) per day of water from Kaveri 100 kilometres (62 mi) to Bangalore.

All content from Kiddle encyclopedia articles (including the article images and facts) can be freely used under Attribution-ShareAlike license, unless stated otherwise. Cite this article:
Kaveri River Facts for Kids. Kiddle Encyclopedia.