Puducherry, also known by the rendering Pondicherry, is a union territory in India. It was formed out of four territories of former French India, namely Pondichéry (Pondicherry; now Puducherry), Karikal (Karaikal), Mahé and Yanaon (Yanam), excluding Chandernagore. It is named after the largest district, Puducherry. Historically known as Pondicherry (Pāṇṭiccēri), the territory changed its official name to Puducherry on 20 September 2006.

The earliest recorded history of the municipality of Puducherry can be traced to the second century AD. The Periplus of the Erythraean Sea mentions a marketplace named Poduke (ch 60). G. W. B. Huntingford suggested this might be a site about 2 miles from the modern Puducherry, which was possibly the location of Arikamedu (now part of Ariyankuppam). Huntingford noted that Roman pottery was found at Arikamedu in 1937. In addition, archaeological excavations between 1944 and 1949 showed that it was "a trading station to which goods of Roman manufacture were imported during the first half of the 1st century" Subsequent investigation by Vimala Begley from 1989 to 1992 modified this assessment, and now place the period of occupation from the third or second century BC to the eighth century AD.

In 1674, the municipality of Pondicherry (Pondichéry) became a French colony of the French colonial empire. Together with Chandernagor (already French since 1673), Mahé (since 1721), Yanam (Yanaon) (since 1731), Karaikal (Karikal) (since 1739) and Masulipatam (1760), it formed the French colony of French India, under a single French governor in Pondicherry, although French rule over one or more of these enclaves was repeatedly interrupted by British occupations. The territories of French India were completely transferred to the Republic of India de facto on 1 November 1954, and de jure on 16 August 1962, when French India ceased to exist, becoming the present Indian constituent union territory of Pondicherry, combining four coastal enclaves (with the exception of Chandernagor, which merged with the state of West Bengal in 1954). 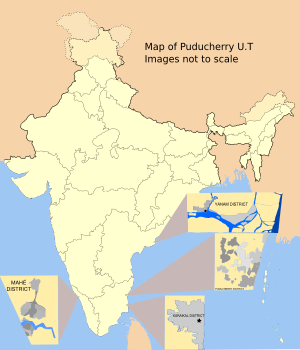 Map showing the districts of Puducherry

The Union Territory of Puducherry consists of four small unconnected districts: Puducherry district (293 km2 or 113 sq mi), Karaikal district (161 km2 or 62 sq mi) and Yanam district (20 km2 or 7.7 sq mi) on the Bay of Bengal and Mahé district (9 km2 or 3.5 sq mi) on the Arabian Sea, covering a total area of 483 km2 (186 sq mi). Puducherry and Karaikal have the largest areas and population, and are both enclaves of Tamil Nadu. Yanam and Mahé are enclaves of Andhra Pradesh and Kerala, respectively. Its population, as per the 2011 Census, is 1,244,464.

Some of Puducherry's regions are themselves amalgamations of non-contiguous enclaves, often called "pockets" in India. The Puducherry region is made of 11 such pockets, some of which are very small and entirely surrounded by the territory of Tamil Nadu. Mahé region is made up of three pockets. This unusual geography is a legacy of the colonial period with Puducherry retaining the borders of former French India.

All four regions of Puducherry are located in the coastal region. Five rivers in Puducherry district, seven in Karaikal district, two in Mahé district and one in Yanam district drain into the sea, but none originates within the territory.

Districts of Union Territory of Puducherry

Hinduism is the major religion with 87.3% of the population adhering to it. Other religions include Christianity (6.2%) and Islam (6%). 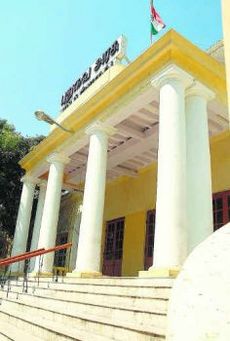 Puducherry is a Union Territory of India rather than a state, which implies that governance and administration falls directly under federal authority. However, Puducherry is one of the three union territories in India (the other being Delhi)and Jammu & Kashmir that is entitled by a special constitutional amendment to have an elected legislative assembly and a cabinet of ministers, thereby conveying partial statehood.

The Centre is represented by the Lieutenant Governor, who resides at the Raj Nivas (Le Palais du Gouverneur) at the Park, the former palace of the French governor. The central government is more directly involved in the territory's financial well-being unlike states, which have a central grant that they administer. Consequently, Puducherry has at various times, enjoyed lower taxes, especially in the indirect category. 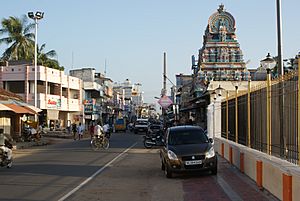 According to the Treaty of Cession of 1956, the four territories of former French India territorial administration are permitted to make laws with respect to specific matters. In many cases, such legislation may require ratification from the federal government or the assent of the President of India.

Article II of the Treaty states:

The Establishments will keep the benefit of the special administrative status which was in force prior to 1 November 1954. Any constitutional changes in this status which may be made subsequently shall be made after ascertaining the wishes of the people. 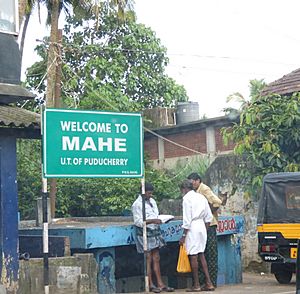 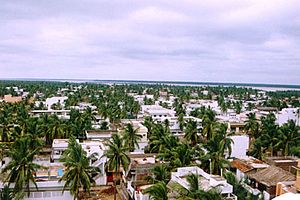 A bird's eye view of Yanam

The gross domestic product of Puducherry, at market prices estimated by Ministry of Statistics and Programme Implementation with figures in millions of Indian rupees grew from 1,840 to 258,190 million rupees from 1980–2014.

The potential for fisheries is substantial in the Union Territory. The four regions of the Union Territory have a coastline of 45 km with 675 of inshore waters, 1.347 hectares (3.33 acres) of inland water and 800 ha of brackish water. 27 marine fishing villages and 23 inland fishing villages host a fishermen population of about 65,000 of which 13,000 are actively engaged in fishing. Tanks and ponds are also tapped for commercial fish rearing. 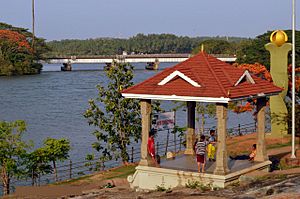 Puducherry is one of the most popular tourist spots for national and international tourists. Out of 274 Paadal Petra Sthalam Shiva Temples, the Puducherry region is owning 1 temple and in Karaikal regions it is having 4 temples which itself a clear proof that the Puducherry territory is also a part of the spiritual and sacramental of Shaivism principles. Besides in Villianur, Bahour and in so many areas of Puducherry region there are so many Shiva temples built up during the golden period of King Chola empire which gives immense pleasure to be proud of that our Puducherry territory was administered under the control of such golden rulers. So visiting such ancient temples would definitely give more spiritual vibrations to the tourists. For every year the Puducherry territory administration also declares official Holiday for performing the grand Car Festivals to the temples situates in Villianur, Veerampattinam that too the Lieutenant Governor of Puducherry and the Chief Minister of Puducherry also participates in such grand Car Festival. Besides in Kizhoor, Puducherry which is 22 km away from Puducherry therein on 18-10-1954 a referendum was conducted to ensure that whether the erstwhile French establishments of Puducherry shall continue with French administration or to merge with Indian Union and finally decided to merge with Indian Union. Puducherry was the residence of Sri Aurobindo (1872–1950) and the Sri Aurobindo Ashram still operates from Puducherry. A unique experimental city Auroville, the brainchild of the Mother, whose inhabitants are drawn from all parts of the world is situated on the outskirts of the city. There are several temples, churches, monuments, parks, and mosques which attract tourists. 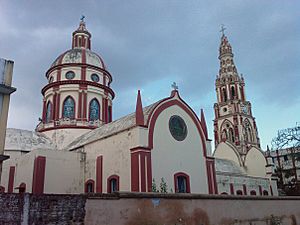 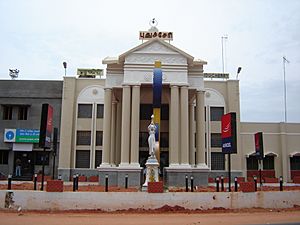 Puducherry is connected by a railway branch line from the five-way junction at Viluppuram and Chennai. The railway line is a broad gauge line with 16 originating trains and 17 terminating trains. 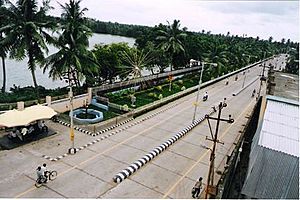 All content from Kiddle encyclopedia articles (including the article images and facts) can be freely used under Attribution-ShareAlike license, unless stated otherwise. Cite this article:
Puducherry Facts for Kids. Kiddle Encyclopedia.