Pondicherry, officially known as Puducherry ( literally New Town in Tamil), is the capital and the most populous city of the Indian Union Territory of Puducherry, with a population of 657,209 and an area of 492 km2. The city is located in the Puducherry district and is surrounded by the state of Tamil Nadu with which it shares most of its culture and language.

Pondicherry city consists of 42 wards. Wards 1–10 are north of the city. Wards 11–19 are in Boulevard Town and remaining wards are southwest of the city centre. 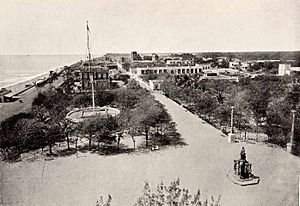 The history of Pondicherry is recorded only after the arrival of Dutch, Portuguese, British and French colonialists. By contrast, nearby places such as Arikamedu, Ariyankuppam, Kakayanthoppe, Villianur and Bahur, which were colonised by the French East India Company over a period of time and later became the union territory of Pondicherry, have recorded histories that predate the colonial period.

Poduke or Poduca (a marketplace) was a Roman trading destination from the mid 1st century. Poduca has been identified as possibly being Arikamedu (now part of Ariyankuppam), located about 2 miles (3.2 km) from the modern city of Pondicherry. The area was part of the Pallava Kingdom of Kanchipuram in the 4th century. The Cholas of Thanjavur held it from the 10th to 13th centuries until it was replaced by the Pandya Kingdom in the 13th century. The Vijayanagar Empire took control of almost all of the south of India in the 14th century and maintained control until 1638 when they were supplanted by the Sultan of Bijapur.

In 1674 the French East India Company set up a trading centre at Pondicherry and this outpost eventually became the chief French settlement in India. Five trading posts were established along the south Indian coast between 1668 and 1674. The city was separated by a canal into the French Quarter and the Indian Quarter.

During the Anglo-French wars (1742–1763), Puducherry changed hands frequently. On 16 January 1761, the British captured Pondicherry from the French, but it was returned under the Treaty of Paris (1763) at the conclusion of the Seven Years' War. The British took control of the area again in 1793 at the Siege of Pondicherry amid the Wars of the French Revolution, and returned it to France in 1814. When the British gained control of India in the late 1850s, they allowed the French to retain their settlements in the country. Pondicherry, Mahé, Yanam, Karaikal and Chandernagor remained a part of French India until 1954 when it was incorporated into the Indian Union with the rest of French India.

On 18 October 1954 in a general election involving 178 people in Pondicherry Municipal and Commune Panchayat, 170 people were in favour of independence and eight people voted against. The de facto transfer of the French Indian territories from French governance to the Indian union took place on 1 November 1954, and was established as the union territory of Pondicherry. However, the formal de jure transfer of territory agreement between France and India was signed on 16 August 1962.

The topography of Pondicherry is the same as that of coastal Tamil Nadu. Pondicherry's average elevation is at sea level, and a number of sea inlets, referred to as "backwaters" can be found. Pondicherry experiences extreme coastal erosion as a result of a breakwater constructed in 1989, just to the south of the city. Where there was once a broad, sandy beach, now the city is protected against the sea by a 2-km-long seawall which sits at a height of 8.5 m above sea level. Whilst there was an early seawall made by the French government in 1735, this was not "hard structure coastal defense" so much as an adjunct to the old shipping pier and a transition from the beach to the city,

Today, the seawall consists of rows of granite boulders which are reinforced every year in an attempt to stop erosion. As a consequence of the seawall, there is severe seabed erosion and turbulence at the coastal margin, resulting in an extreme loss of biodiversity within the critical intertidal zone. Whenever gaps appear as the stones fall into the continually eroding seabed, the government adds more boulders. Pondicherry's seawall has also caused beach erosion to migrate further up the coast, to the fishing villages in Puducherry and Tamil Nadu to the north of the city. 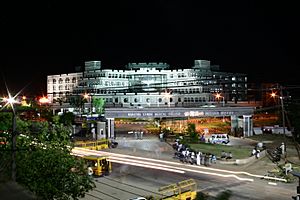 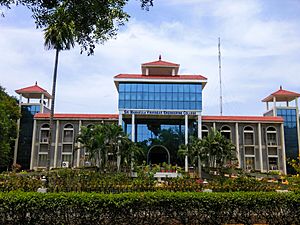 In 2012, the Ministry of Power inaugurated the Smart Grid project in Puducherry. Farming around Pondicherry include crops such as rice, pulses, sugarcane, coconuts, and cotton. In 2016, the Pondicherry State Government Employees Central Federation presented a status paper on the fiscal and social crisis in Puducherry to Union Home Minister Rajnath Singh. The report stated that a "combination of a staggering debt, stagnant tax revenues and rampant misappropriation of funds has throttled the economy of the Union Territory" and called for measures on a war footing to "deliver good governance and end corruption."

The climate of Pondicherry is classified by the Köppen climate classification as tropical wet and dry (As), similar to that of coastal Tamil Nadu. Summer lasts from April to early June, when maximum temperatures reach 41 °C (106 °F). The average maximum temperature is 36 °C (97 °F). Minimum temperatures are in the order of 28–32 °C (82–90 °F). This is followed by a period of high humidity and occasional thundershowers from June till September.

The northeast monsoon sets in during the middle of October, and Pondicherry gets the bulk of its annual rainfall during the period from October to December. The annual average rainfall is 1,240 mm (49 in). Winters are warm, with highs of 30 °C (86 °F) and lows often dipping to around 18–20 °C (64–68 °F).

All content from Kiddle encyclopedia articles (including the article images and facts) can be freely used under Attribution-ShareAlike license, unless stated otherwise. Cite this article:
Pondicherry Facts for Kids. Kiddle Encyclopedia.