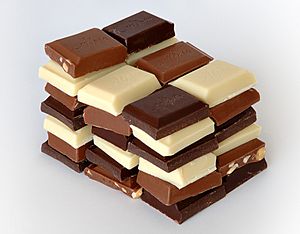 Many kinds of chocolate

Milk chocolate is a type of chocolate. It contains cocoa, sugar, and milk. The term "milk chocolate" was first used in 1687, to describe a drink which came from Jamaica to London, but the milk chocolate bar did not exist until 1875, when inventor Daniel Peter mixed the ingredients together to make it.

All content from Kiddle encyclopedia articles (including the article images and facts) can be freely used under Attribution-ShareAlike license, unless stated otherwise. Cite this article:
Milk chocolate Facts for Kids. Kiddle Encyclopedia.