Toblerone ( German:) is a Swiss chocolate bar brand owned by US confectionery company Mondelēz International, Inc., formerly Kraft Foods. Kraft acquired Toblerone from owner Jacobs Suchard in 1990. It is produced in Bern, Switzerland and the bear symbol of the city is depicted in the logo. Toblerone is known for its distinctive shape, a series of joined triangular prisms.

Toblerone was created by Emil Baumann & Theodor Tobler (1876–1941) in Bern, Switzerland, in 1908. Emil Baumann, the cousin of Theodor Tobler, created the unique recipe consisting of milk chocolate including nougat, almonds, and honey. Theodor Tobler came up with the distinctive triangular shape and packaging. The product's name is a portmanteau combining Tobler's name with the Italian word torrone (a type of nougat). 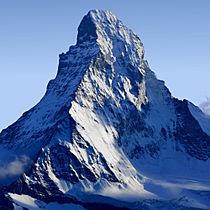 The triangular shape of the Matterhorn in the Italian Alps/Swiss Alps is commonly believed to have given Theodor Tobler his inspiration for the shape of Toblerone. However, according to Theodor's sons, the triangular shape originates from a pyramid shape that dancers at the Folies Bergères created as the finale of a show that Theodor saw. Nevertheless, a silhouette of the Matterhorn appears on the modern Toblerone packaging, as seen in the photo above right.

Some early advertisements for Tobler chocolate appeared in the international languages Esperanto and Ido.

Theodor Tobler applied for a patent for the Toblerone manufacturing process in Bern in 1909. The Toblerone brand was trademarked in 1909, at the Swiss Federal Institute of Intellectual Property in Bern.

The Tobler company was independent for many years. In 1970, it merged with Suchard, the makers of Milka, to become Interfood. After the Tobler & Suchard merger it was decided to create a new and single source for marketing & exporting the various products manufactured by both companies worldwide, Multifood. Max E. Baumann, the son of Emil Baumann, was made director of this new division. Tobler & Suchard companies merged with the Jacobs coffee company in 1982 to create Jacobs Tobler & Suchard. Mondelēz (Kraft Foods Inc at that time) acquired the majority of Jacobs Suchard, including Toblerone, in 1990. 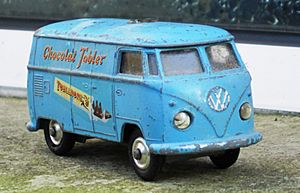 Advertising in the 1960s included the production of a model Volkswagen Type 2 by Corgi Toys, featuring Toblerone designs on its side panels

Bar sizes range from ten centimetres to nearly one metre, all similarly proportioned. According to Schott's Food & Drink Miscellany the sizes and number of peaks for Toblerones are as follows:

For the yearly Toblerone Schoggifest, a special oversized bar is created to celebrate the bar's anniversary. The bar's weight represents the years of Toblerone, with the first bar in 2008 weighing 100 kg.

Since the 1970s, other variants of Toblerone have been produced. These include:

In 2016, the 400g and 170g bars in the United Kingdom were modified to have two peaks removed and larger gaps between each peak, which cut the weight of the bars and reduced costs while retaining the same package size and retail price. This change reduced the weights of the aforementioned bars to 360g and 150g respectively; other sizes of bar were unaffected. The change was not well received, with one MSP calling for "government action" by the Scottish Parliament over the change. In 2018, it was announced that the bars would revert to its original shape, and the 170g (150g) bar would be replaced by a 200g bar.

In the past it has been manufactured in other locations including Bedford in England. In the 1970s and 1980s, it was manufactured under license for the Yugoslav market by Kraš in Zagreb (present-day Croatia).

A similar product is the Croatian product Kolumbo, made by factory Kraš from Zagreb. This chocolate is also composed of pyramids of hazelnuts and honey. Kraš was producing Toblerone under license during the 1970s and 1980s.

Another comparable product is Mahony, produced by the company Chocolat-Frey AG in Switzerland.

In July 2017, in response to Toblerone's 2016 reduction in size, UK variety store chain Poundland launched its own version of Toblerone called "Twin Peaks", which is larger than the modified Toblerone bar. 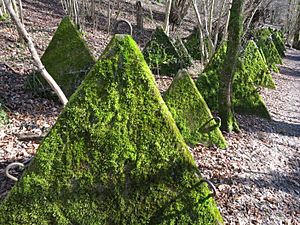 The distinct pyramidal shape of the bar lent its name to the Toblerone line, a series of anti-tank emplacements prevalent in Switzerland's border areas.

The interior of the Tobler factory in Switzerland was the location where the title sequence of Willy Wonka & the Chocolate Factory was filmed. However, the majority of the film was produced in West Germany.

In 1995, it was revealed that the Swedish politician Mona Sahlin had misused her government-issued credit card for unauthorised purchases. Because she had bought, among many other more expensive items, two bars of Toblerone, pro-Sahlin journalists attempted to downplay her abuse of parliamentary financial privileges as the "Toblerone affair". These attempts were ultimately unsuccessful, and Sahlin was forced to step down as a candidate for the post as Prime Minister. She returned to politics in 1998.

A triangular set of student residences on the Oxford Road, Manchester, for students of the University of Manchester built circa 1975 and resembling the chocolate bar are known as the Toblerones.

The largest-sized Toblerone in production is featured as a running gag in the 2017 Netflix series Neo Yokio.

All content from Kiddle encyclopedia articles (including the article images and facts) can be freely used under Attribution-ShareAlike license, unless stated otherwise. Cite this article:
Toblerone Facts for Kids. Kiddle Encyclopedia.