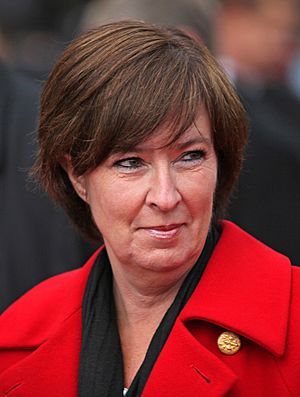 Mona Ingeborg Sahlin (born Andersson on March 9, 1957 in Sollefteå, Sweden) is a former leader for the Swedish Social Democratic Party, when she replaced Göran Persson after his ten years as leader, she was the first woman to do so. She was the minister responsible for the handling of the Heart 2 Art Exhibition in Stockholm 2002. Toblerone Scandal or Sahlin Scandal is the name of a Swedish scandal, in which there in October 1995 came to public attention that the Socialist politician Mona Sahlin during her time as Minister for Employment, 1990-1991, on several occasions used its credit cards for private expenses.

All content from Kiddle encyclopedia articles (including the article images and facts) can be freely used under Attribution-ShareAlike license, unless stated otherwise. Cite this article:
Mona Sahlin Facts for Kids. Kiddle Encyclopedia.