Kids Encyclopedia Facts
(Redirected from Dark chocolate)
This page is about the food. For the color, see Chocolate (color). 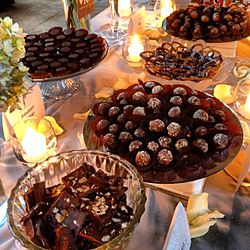 Chocolate is a food made from the seeds of a cacao tree. It is used in many desserts like pudding, cakes, candy, and ice cream. It can be a solid form like a candy bar or it can be in a liquid form like hot chocolate. The taste of chocolate is often described as sweet because chocolate makers usually add a lot of sugar and milk for taste. This means that chocolate can be bad for your teeth and health. It is best to eat chocolate in moderation.

Chocolate has become one of the most popular food types and flavors in the world, and a vast number of foodstuffs involving chocolate have been created, particularly desserts including cakes, pudding, mousse, chocolate brownies, and chocolate chip cookies. Many candies are filled with or coated with sweetened chocolate, and bars of solid chocolate and candy bars coated in chocolate are eaten as snacks. Gifts of chocolate molded into different shapes (e.g., eggs, hearts) have become traditional on certain Western holidays, such as Easter and Valentine's Day. Chocolate is also used in cold and hot beverages such as chocolate milk and hot chocolate and in some alcoholic drinks, such as creme de cacao.

Although cocoa originated in the Americas, recent years have seen African nations assuming a leading role in producing cocoa. Since the 2000s, Western Africa produces almost two-thirds of the world's cocoa, with Ivory Coast growing almost half of that number. 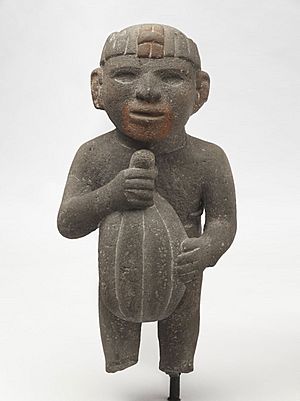 The cacao tree was first found to be useful for its seeds about two thousand years ago. Early Central Americans and Mexicans used the seeds from the cacao tree to make a drink that tasted bitter, not sweet. Only the important people could drink it. The word for "chocolate" in almost every language comes from its name in the Nahuatl language of Mexico, chocolatl.

Later on, this drink was made sweeter and made into the treat that is known today as hot chocolate. It was made popular by Spanish explorers who brought it from North America to Spain. When chocolate was sweetened and made into candy, it became a very popular treat for many Europeans. At first, only the rich could afford chocolate. Now, many people enjoy it. Most cocoa today is made in Africa. 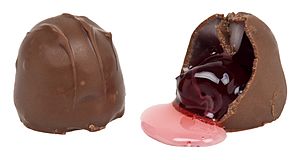 Chocolate is commonly used as a coating for various fruits such as cherries and/or fillings, such as liqueurs. 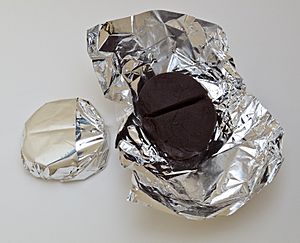 Disk of chocolate (about 4cm in diameter), as sold in Central America, for making hot cocoa. Note that the chocolate pictured here is soft, can easily be crumbled by hand, and already has sugar added.

Several types of chocolate can be distinguished. Pure, unsweetened chocolate, often called "baking chocolate", contains primarily cocoa solids and cocoa butter in varying proportions. Much of the chocolate consumed today is in the form of sweet chocolate, which combines chocolate with sugar.

Dark chocolate is produced by adding fat and sugar to the cacao mixture.

Unsweetened chocolate is pure chocolate liquor, also known as bitter or baking chocolate. It is unadulterated chocolate: the pure, ground, roasted chocolate beans impart a strong, deep chocolate flavor. It is typically used in baking or other products to which sugar and other ingredients are added. Raw chocolate, often referred to as raw cacao, is always dark and a minimum of 75% cacao.

Poorly tempered chocolate may have whitish spots on the dark chocolate part, called chocolate bloom; it is an indication that sugar and/or fat has separated due to poor storage. It is not toxic and can be safely consumed.

Chocolate may be a factor for heartburn in some people because one of its constituents, theobromine.

Excessive consumption of large quantities of any energy-rich food, such as chocolate, without a corresponding increase in activity to expend the associated calories, can increase the risk of weight gain and possibly obesity. Raw chocolate is high in cocoa butter, a fat which is removed during chocolate refining, then added back in varying proportions during the manufacturing process. Manufacturers may add other fats, sugars, and milk as well, all of which increase the caloric content of chocolate.

Chocolate is safe to eat unless it is eaten in large amounts. Some animals, like dogs, become sick if they eat chocolate. People with diabetes can also get sick from eating chocolate. Dark chocolate contains ingredients that lower blood pressure and fight disease. Small amounts of dark chocolate have been found to lower the risk of heart disease because of polyphenol in chocolate. It is necessary to eat moderate amount of chocolate. 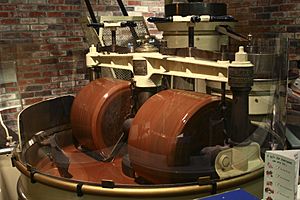 There are a number of ingredients in chocolate. The most notable of these are caffeine and theobromine. These two chemicals are closely related and are found in all cocoa beans. In any bean, the amount of each chemical varies depending on the genetics of the tree and the stresses placed on the tree during the growing season. It takes two hours to make chocolate. 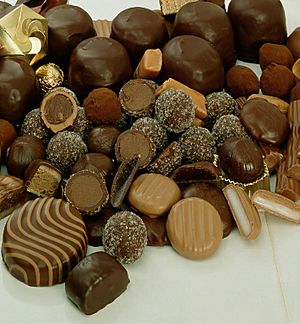 Food conglomerates Nestlé SA and Kraft Foods both have chocolate brands. Nestlé acquired Rowntree's in 1988 and now markets chocolates under their own brand, including Smarties (a chocolate candy) and Kit Kat (a candy bar); Kraft Foods through its 1990 acquisition of Jacobs Suchard, now owns Milka and Suchard. In February 2010, Kraft also acquired British-based Cadbury.; Fry's, Trebor Basset and the fair trade brand Green & Black's also belongs to the group. 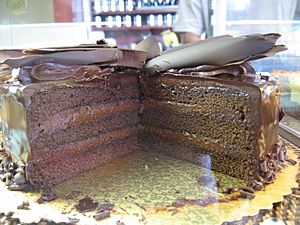 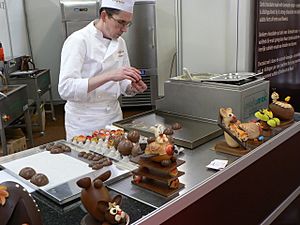 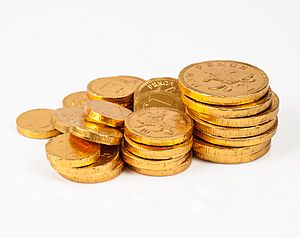 Chocolate is associated with festivals such as Easter, when moulded chocolate rabbits and eggs are traditionally given in Christian communities, and Hanukkah, when chocolate coins are given in Jewish communities. Chocolate hearts and chocolate in heart-shaped boxes are popular on Valentine's Day and are often presented along with flowers and a greeting card. Chocolate is an acceptable gift on other holidays and on occasions such as birthdays.

Many confectioners make holiday-specific chocolate candies. Chocolate Easter eggs or rabbits and Santa Claus figures are two examples. Such confections can be solid, hollow, or filled with sweets or fondant.

All content from Kiddle encyclopedia articles (including the article images and facts) can be freely used under Attribution-ShareAlike license, unless stated otherwise. Cite this article:
Chocolate Facts for Kids. Kiddle Encyclopedia.