A glass of chocolate milk.

Some nutritionists have criticized chocolate milk for its high sugar content and its relationship to childhood obesity. In New York City, school food officials report that nearly 60 percent of the 100 million cartons served each year contain fat-free chocolate milk. Chocolate milk can contain twice as much sugar as plain low-fat milk from added sugars. 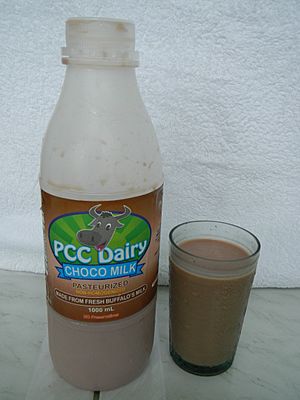 A number of studies have been issued in regards to chocolate milk nutrition. A 2005 study by the New York City (NYC) Department of Education found that by removing whole milk and replacing it with low-fat or fat-free chocolate milk, students were served an estimated 5,960 fewer calories and 619 fewer grams of fat per year. However, more recent studies show that fat-free and low-fat milk may actually increase body fat and contribute to obesity. Whole milk may in fact be healthier for obese children than low-fat or non-fat milk.

All content from Kiddle encyclopedia articles (including the article images and facts) can be freely used under Attribution-ShareAlike license, unless stated otherwise. Cite this article:
Chocolate milk Facts for Kids. Kiddle Encyclopedia.