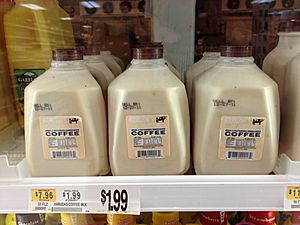 Coffee milk is a drink made by mixing coffee syrup or coffee extract and milk together in a manner similar to chocolate milk. It is the official state drink in Rhode Island.

Coffee syrup is a sweetened coffee concentrate and key ingredient in coffee milk. The syrup is prepared by straining water and sugar through coffee grounds.

While the precise origin of coffee milk is unclear, several sources trace it back to the 19th century Italian immigrant population in Providence, Rhode Island. In the late 19th and early 20th centuries, approximately 55,000 Italian immigrants traveled to Providence. The large influx of immigrants, of which Italians were the largest group, led to an introduction of their traditions and customs to Rhode Island. One of their culinary traditions was drinking sweetened coffee with milk. Eventually, it is believed that this led to the creation of coffee milk in these immigrant households. The development of diners and soda fountains brought coffee milk to the greater public. The first coffee syrup is thought to have been produced by a soda fountain operator who sweetened leftover coffee grounds with milk and sugar. This syrup was mixed into glasses of milk to create coffee milk.

Coffee syrup is produced by straining hot water and sugar through coffee grounds, and is also prepared by preparing a large amount of hot coffee and then adding sugar to it afterward. A cold-process method for coffee syrup involves soaking pulverized coffee beans for some time and then adding sugar. It was originally produced in the 1930s in corner drug stores and was targeted towards children, while their parents drank hot coffee.

Due to the popularity of the product, coffee syrup was eventually bottled and sold by merchants. The first mass-produced coffee syrup was introduced by the Silmo Packing Company of New Bedford, Massachusetts in 1932. In 1938, Warwick, Rhode Island-based Eclipse Food Products began heavily promoting its own coffee syrup product, with Lincoln, Rhode Island's Autocrat Coffee coming to market in the 1940s. Autocrat purchased long-time competitor Eclipse in 1991 and today produces both brands of syrup. Autocrat is claimed to be the most popular brand of coffee syrup in Rhode Island. More recently, brands such as Dave's Coffee and Morning Glory have begun to offer coffee syrups with desired customer qualities including no high-fructose corn syrup and artificial colors. Some people brew their own in a saucepan using coffee and sugar.

The public loved the idea of coffee milk and, especially due to the large population of Italian immigrants, the popularity of coffee milk began to rise over the course of the 20th century. In 1993, state politicians took notice. After having a competition between coffee milk and Del's Lemonade, the Rhode Island Legislature voted to change the state drink. On July 29, 1993, Rhode Island named coffee milk their official state drink. As coffee milk took off in Rhode Island, neighboring states also took notice of it. Additionally, local businesses in Rhode Island took advantage of this growth of popularity. In December 2013, the Narragansett Brewing Company partnered with Autocrat Coffee to market a limited edition "coffee milk stout". In the summer of 2015, Warwick Ice Cream worked with Autocrat to begin producing coffee milk ice cream.

Use in other beverages

Coffee milk and coffee syrup have been used as ingredients in other beverages.

All content from Kiddle encyclopedia articles (including the article images and facts) can be freely used under Attribution-ShareAlike license, unless stated otherwise. Cite this article:
Coffee milk Facts for Kids. Kiddle Encyclopedia.