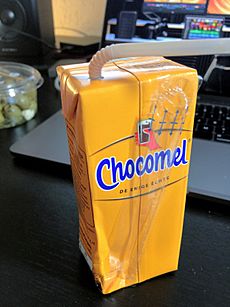 Chocomel in a carton package

Chocomel (known as Cécémel in Belgium) is a Dutch brand of chocolate-flavoured milk, produced by Campina in Amersfoort, the Netherlands. The brand's trademark is owned by FrieslandCampina.

It was formerly produced by Nutricia in Zoetermeer and Riedel Drinks. Chocomel is widely available in the Netherlands, Germany and in Belgium (under the name of Cécémel). There are five varieties of Chocomel. Campina stopped producing a Mokka (mocha) flavor in 2011 and introduced the Vers varieties in 2015. Chocomel is also available in pod form for the Philips/Douwe Egberts Senseo coffee brewing system. The drink's slogan is "De Enige Echte" (in Dutch), which means "the one and only".

All content from Kiddle encyclopedia articles (including the article images and facts) can be freely used under Attribution-ShareAlike license, unless stated otherwise. Cite this article:
Chocomel Facts for Kids. Kiddle Encyclopedia.