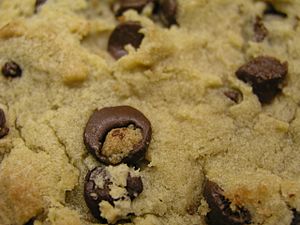 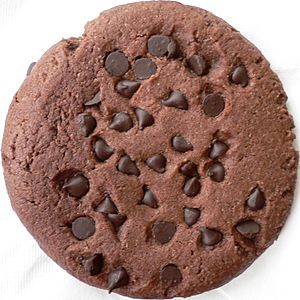 A chocolate chip cookie is a drop cookie that originated in the United States and features chocolate chips (small morsels of sweetened chocolate) as its distinguishing ingredient. The traditional recipe combines a dough composed of butter and both brown and white sugar, semi-sweet chocolate chips and vanilla. Variations include recipes with other types of chocolate as well as additional ingredients such as nuts or oatmeal. There are also vegan versions with ingredient substitutions such as vegan chocolate chips, vegan margarine, and so forth.

The chocolate chip cookie was invented by the American chef Ruth Graves Wakefield in 1938. She invented the recipe during the period when she owned the Toll House Inn, in Whitman, Massachusetts. In this era, the Toll House Inn was a popular restaurant that featured home cooking. It is often incorrectly reported that she accidentally developed the cookie, and that Wakefield expected the chocolate chunks would melt, making chocolate cookies. In fact, Wakefield stated that she deliberately invented the cookie. She said, "We had been serving a thin butterscotch nut cookie with ice cream. Everybody seemed to love it, but I was trying to give them something different. So I came up with Toll House cookie."

Wakefield's cookbook, Toll House Tried and True Recipes, was first published in 1936 by M. Barrows & Company, New York. The 1938 edition of the cookbook was the first to include the recipe "Toll House Chocolate Crunch Cookie" which rapidly became a favorite cookie in American homes.

During WWII, soldiers from Massachusetts who were stationed overseas shared the cookies they received in care packages from back home with soldiers from other parts of the United States. Soon, hundreds of soldiers were writing home asking their families to send them some Toll House cookies, and Wakefield was soon inundated with letters from around the world requesting her recipe. Thus began the nationwide craze for the chocolate chip cookie.

Every bag of Nestlé chocolate chips sold in North America has a variation (butter vs. margarine is now a stated option) of her original recipe printed on the back. 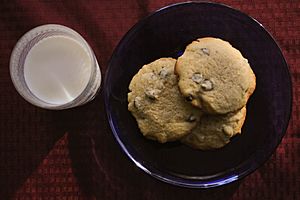 Chocolate chip cookies are often paired with a glass of milk. The fat particles of the milk enhance the tasting sensation of the sugar from the cookies, giving a smoother mouthfeel.

Although the Nestlé's Toll House recipe is widely known, every brand of chocolate chips, or "semi-sweet chocolate morsels" in Nestlé parlance, sold in the U.S. and Canada bears a variant of the chocolate chip cookie recipe on its packaging. Almost all baking-oriented cookbooks will contain at least one type of recipe.

Practically all commercial bakeries offer their own version of the cookie in packaged baked or ready-to-bake forms. There are at least three national (U.S./North America) chains that sell freshly baked chocolate chip cookies in shopping malls and standalone retail locations. Several businesses—including Doubletree hotels, Citibank, Aloha, and Midwest Airlines—offer freshly baked cookies to their patrons to differentiate themselves from their competition.

There is an urban legend about Neiman Marcus' chocolate chip cookie recipe that has gathered a great deal of popularity over the years.

To honor the cookie's creation in the state, on July 9, 1997, Massachusetts designated the chocolate chip cookie as the Official State Cookie, after it was proposed by a third-grade class from Somerset, Massachusetts. 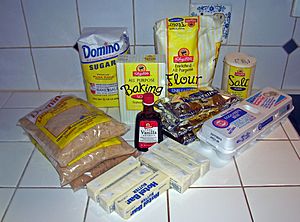 Chocolate chip cookies are commonly made with white sugar; brown sugar; flour; a small portion of salt; eggs; a leavening agent such as baking powder; a fat, typically butter or shortening; vanilla extract; and semi-sweet chocolate pieces. Some recipes also include milk or nuts (such as chopped walnuts) in the dough.

Depending on the ratio of ingredients and mixing and cooking times, some recipes are optimized to produce a softer, chewy style cookie while others will produce a crunchy/crispy style. Regardless of ingredients, the procedure for making the cookie is fairly consistent in all recipes: First, the sugars and fat are creamed, usually with a wooden spoon or electric mixer. Next, the eggs and vanilla extract are added followed by the flour and leavening agent. Depending on the additional flavoring, its addition to the mix will be determined by the type used: peanut butter will be added with the wet ingredients while cocoa powder would be added with the dry ingredients. The titular ingredient, chocolate chips, as well as nuts are typically mixed in towards the end of the process to minimize breakage, just before the cookies are scooped and positioned on a cookie sheet. Most cookie dough is baked, although some eat the dough as is, or use it as an addition to vanilla ice cream to make chocolate chip cookie dough ice cream.

The texture of a chocolate chip cookie is largely dependent on its fat composition and the type of fat used. A study done by Kansas State University showed that carbohydrate based fat-replacers were more likely to bind more water, leaving less water available to aid in the spread of the cookie while baking. This resulted in softer, more cake-like cookies with less spread. 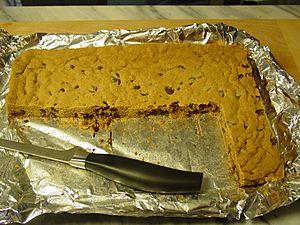 All content from Kiddle encyclopedia articles (including the article images and facts) can be freely used under Attribution-ShareAlike license, unless stated otherwise. Cite this article:
Chocolate chip cookie Facts for Kids. Kiddle Encyclopedia.