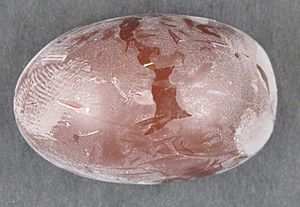 Bloom on chocolate filled with marzipan 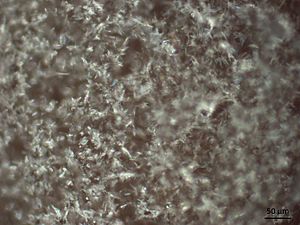 Bloom on chocolate filled with marzipan viewed under optical microscope

Chocolate bloom is either of two types of whitish coating that can appear on the surface of chocolate: fat bloom, caused by changes in the fat crystals in the chocolate; and sugar bloom, due to crystals formed by the action of moisture on the sugar. Fat and sugar bloom damage the appearance of chocolate and limit its shelf life. Chocolate that has "bloomed" is still safe to eat (as it is a non-perishable food due to its sugar content), but may have an unappetizing appearance and surface texture. Chocolate bloom can be repaired by melting the chocolate down, stirring it, then pouring it into a mold and allowing it to cool, bringing the sugar or fat back into the solution.

Fat bloom is the separation to the cocoa butter from the other components. Generally bloom arises from storage or age. Improper formulation exacerbates the problem. Lower melting point triglycerides in cocoa butter are more mobile and migrate to the surface of the chocolate item.

Cocoa butter can be classified into polymorphic forms. Bloomed chocolates contain the most stable VI polymorph of cocoa butter. Bloom occurs through the uncontrolled polymorphic transformation of cocoa butter from a less stable form (form IV or V) to the most stable form (form VI). The technology of good chocolate production depends on ensuring that only the stable form of the cocoa butter ingredient exists in the final product. In poorly tempered chocolate, form IV will transform to V and eventually form VI, resulting in bloom, while in well-tempered chocolate, form V will transform to form VI and bloom may also occur. Elevated and/or fluctuating temperatures promote the transformation rate and thus also promote the rate of bloom formation. However, it is found that the production of form VI from form V does not always lead to bloom; a direct relationship cannot be established between fat bloom and the evolution of the crystalline forms. The onset of transformation from form V to form VI crystals is not the cause of visual bloom; rather, this transition should be considered as an aspect of cocoa butter recrystallization that may result in bloom.

While the most common is fat bloom, sugar bloom also occurs and is not necessarily distinguishable from the fat bloom by appearance. In freshly sugar bloomed samples, it is often easy to feel the surface difference; sugar bloom feels dry and does not melt to the touch, while fat bloom feels slick and melts. One can often see the difference by touching a small droplet of water to the surface. With fat bloom, the droplet simply beads up. With sugar bloom, the droplet quickly flattens and spreads, as the water dissolves the microscopic sugar particles on the surface. Alternatively, gentle warming of the surface (with a hairdryer, for example) will cause the crystals of fat bloom to melt, removing the appearance of bloom, while leaving sugar bloom unchanged.

Sugar bloom can be reduced by maintaining an appropriate storage temperature for chocolate products. A psychrometric chart can be used to determine the temperature above which food must be maintained in order to avoid condensation.

All content from Kiddle encyclopedia articles (including the article images and facts) can be freely used under Attribution-ShareAlike license, unless stated otherwise. Cite this article:
Chocolate bloom Facts for Kids. Kiddle Encyclopedia.