Fry's Chocolate Cream was first produced in 1861 and is considered the direct descendant of Fry's Cream Stick produced in 1853. The Cream Stick was the first industrialised and affordable chocolate bar. In 1875, Fry's Chocolate cream was remoulded to the shape it still has today. During production, it once exceeded half a million units per day and the foil wrapping and label would appear in 1925. The Orange Cream and Peppermint Cream, followed by Fry's Five Centre, were introduced in 1934. 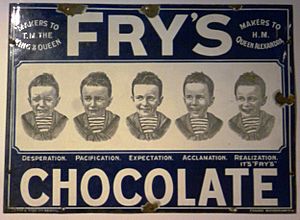 There are currently five variants of Fry's Cream:

Over the years, other variants existed:

An unsuccessful mid-1990s relaunch attempt also saw new variants available under the modernised "Fry's Spirit" branding for a while:

Fry's chocolate bar was promoted by model George Lazenby, who later portrayed James Bond in On Her Majesty's Secret Service, in 1969.

The Fry's chocolate bar was first produced in Union Street, Bristol, England in 1866, where the family name had been associated with chocolate making since c. 1761. In 1923, Fry's (now Cadbury) chocolate factory moved to Somerdale Garden City, Keynsham, England.

Following a 2010 takeover of Cadbury plc by Kraft Foods, the Somerdale factory was closed on 31 March 2011 and its machinery shipped to Warsaw, Poland. Then, after acquisition of Cadbury by Mondelez International production was relocated and Warsaw plant became part of Lotte Wedel.

All content from Kiddle encyclopedia articles (including the article images and facts) can be freely used under Attribution-ShareAlike license, unless stated otherwise. Cite this article:
Fry's Chocolate Cream Facts for Kids. Kiddle Encyclopedia.